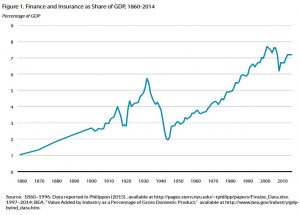 A new report from the Tax Policy Center (TPC), a U.S. nonpartisan joint project of the Brookings Institution and the Urban Institute, looks at the potential revenue yields from a Financial Transactions Tax (FTT) and how the burden of the tax would fall on the U.S. population. It also notes that the FTT concept has a long and venerable history, going back at least as far as 1694.

The FTT concept is designed not only to raise revenue, but potentially can dampen harmful financial speculation and curb the size of the financial sector, which as the graph shows, has grown very large. Increasing research shows that when financial sectors grow too large relative to an economy, economic growth can suffer, and various other ailments can ensue.

This report, while not providing an endorsement of FTT, is tremendously valuable for advocates of the tax.
. . .

Its assessment of the FTT is quite useful for several reasons. First, the report argues that a FTT is clearly feasible based on the existence of a large number of FTTs in countries around the world and the likelihood that one will be instituted in the euro zone in the near future. Second, the report finds that a scaled tax, similar to the one being debated in the euro zone, with a rate of 0.1 percent on stock trades, would raise over $50 billion a year in additional revenue and more than $540 billion over the next decade. Third, it shows the tax to be highly progressive, with the top quintile paying 75 percent of the tax and the richest one percent paying over 40 percent of the tax.

As the report notes: a lot of countries already have FTTs in place: