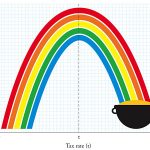 The Laffer Curve, not spotted last week in Kansas

From a new paper by Paul Caron of Pepperdine University and Joseph Bankman of Stanford University:

“The conventional wisdom in California two years ago was that raising taxes on the wealthy would harm the economy and doom any politician who dared touch this third rail. Instead, the public embraced this approach at the ballot box and, after enjoying the fruits of an economic turnaround, appears poised to reward the Governor with a landslide re-election.”

It seems that the absurd Laffer Curve, which is often used to make the ridiculous proposition that tax cuts increase revenue, didn’t work in this case.

Now in Kansas, they went the other way. From the New York Times a few days ago:

“The tax cuts were the leading issue in the Kansas governor’s race this year, and in addition to re-electing Governor Brownback, voters expanded the Republican supermajority in the state’s House of Representatives. This was a clear mandate for the policy of deep tax cuts.”

How has Kansas fared?

Well, the article starts with this:

“Kansas’ budget problems keep getting worse. . . . state revenues dropped 11 percent in the fiscal year 2014 (which ended in June) after the tax cuts took effect.  But that may not even be the whole picture. A close look at the state’s new revenue projections makes clear they are highly optimistic, even after this week’s cut in the forecast.”

You get the picture. Tax cuts reduce revenue. As you’d expect.

Are these just anecdotes, though? Well, there’s all this to consider, for starters.

There is certainly a prevalent idea out there that tax hikes on the rich will compel rich people to leave in droves, and make your state ‘uncompetitive’ (whatever that means).

But will they? In fact the United States, with its high potential mobility of people and large number of states with different tax systems, makes a great petri-dish for studying these things.  And the general consensus is: taxes don’t really have much bearing on where people want to live. Higher taxes generally mean better public services, and vice versa. A meta-analysis by Michael Mazerow last May, entitled State Taxes Have a Negligible Impact on Americans’ Interstate Moves, concluded:

“A number of sophisticated statistical studies of the impact of state and local taxes on interstate migration of individuals and households have been conducted over the last 25 years or so. Taken as a whole, the research strongly refutes the claim that state and local taxes have a significant impact on migration. Seven economists (or groups of economists) have published studies on state taxes and migration in peer-reviewed economics journals since 2000. Six of the seven concluded that taxes were not a major driver of interstate moves. . . . Eight additional studies on the impact of state taxes on migration that were not published in academic journals have been released since 2000. Six of the eight find either that state income taxes have no effect or that the effect is small and/or inconsistent.”

Which is probably as much agreement as you’re going to get among bickering academics in this viciously polarised, politicised terrain.

Back to the Caron / Bankman paper, which does an unusual and welcome thing for academics.

Get this: it urges scholars to take their heads out of the sand and get stuck into the real world. In fact, this is the central argument of the paper (which is entitled California Dreamin’: Tax Scholarship in a Time of Fiscal Crisis.)

“We have found that the need for more revenue is a common conversation topic among tax scholars. However, it is not a common topic in tax scholarship. Indeed, it is not even clear that it “qualifies” as scholarship, as that term is commonly defined. In law, at least, highly praised scholarship is generally marked by a masterful description of the law that suggests the need for change.”

Quite so, and strong and unusual medicine.

Now here is some discussion that we at TJN and quite a few others have been saying for years. It’s worth quoting at length.

“In recent years, legal tax scholars have made normative claims based on those arguments. However, those normative claims are quite limited and explicitly apolitical . . . . writing about the fiscal crisis, in contrast, throws the scholar directly into the political world. . . . Legal tax scholars who write on this subject run the risk of being dismissed as political, or lacking requisite knowledge.

Unfortunately, scholars in allied fields face similar problems. Economists are also reluctant to write on subjects so entwined with politics and often have less knowledge of specific tax provisions than legal tax scholars. Political scientists lack economic sophistication and knowledge of the tax law, and know less about the politics of tax preferences than either lawyers or economists. The fiscal crisis thus falls between at least three disciplines. As a result, scholars in each of those disciplines are reluctant to write on a subject they believe is central to the nation’s health.”

We are, indeed, better than this. Or we could be.

They cite honourable exceptions, such as this highly recommended book by Ed Kleinbard, if you’re interested in the U.S. tax system.

“Two years ago, both California and the nation were imperiled by long- term, structural, budget imbalances. California has reduced that peril by raising (already high) personal tax rates on the wealthy. The political success of that approach suggests that at the national level, Americans might be willing to support higher rates to maintain government services and move toward fiscal solvency.”