As scandals emerge from the Paradise Papers, the Big Four accountancy firms seem to have managed to stay largely out of the spotlight once again. But research released today shows that scrutiny of their practices is justified in the public interest. The new study is authored by Dr Chris Jones and Dr Yama Temouri of Aston Business School and the Tax Justice Network’s chief executive, Alex Cobham. You can find the abstract and details for access here, but here’s a summary of the findings:

Leading estimates show that profit shifting by multinational companies is responsible for tax revenue losses globally of $500 billion or more each year. Various document leaks, including the Paradise Papers and earlier LuxLeaks, have shown anecdotally the central role of the ‘big four’ accounting firms – Deloitte, EY, KPMG and PwC. Now our research published today in a top tier, peer-reviewed academic journal shows the systematic nature of the Big Four’s role.

We find that multinationals that use a Big Four audit firm to audit their accounts make significantly greater use of tax havens compared to a set of firms who choose not to use the Big Four. Hence, we demonstrate a strong correlation between Big Four use and tax avoidance but also, and importantly, we offer evidence of causality. It would appear that those multinationals that take on a Big Four firm become more tax aggressive. 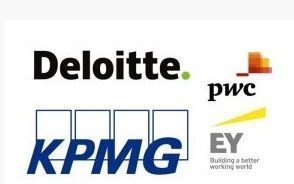 Our research shows that rather than leading the way in ensuring the public accountability and transparency of their clients, the big four are key players in the promotion of financial secrecy and complexity that underpins the massive revenue losses globally from profit shifting. Those losses in turn impose enormous social costs through cuts in public spending.

The study was authored by Dr Chris Jones and Dr Yama Temouri of Aston Business School – which is in the top 1% of business schools worldwide with triple accreditation from AMBA, AACSB and EQUIS – and the Tax Justice Network’s chief executive, Alex Cobham.

On the publication of the new research Dr Jones said: “This study clearly demonstrates how the Big Four have become key enablers of the systematic use of tax havens and tax avoidance by multinational firms.”

“The Big Four on a global scale appear to help MNEs to escape the regulatory limits and controls of specific nation states – which runs completely counter to their global licence to audit firms and ensure their accountability. It’s quite possible that the Big Four have a hand in the majority of the $500 billion of annual, revenue losses due to multinational profit shifting worldwide. It’s high time that policymakers consider global coordination to limit the damage the big four are imposing – and to re-evaluate urgently the enormous policy influence that they allow the Big Four to have.”

“An additional worrying feature of our study is the weakness of the Orbis database of company balance sheets – the leading data source for most studies of multinationals’ tax behaviour. The systematic weakness of data coverage for tax haven subsidiaries means that all these studies risk understating the degree of profit shifting – and similarly our results here are likely to be biased in a conservative direction.”. If multinationals are forced by legislators to publish their accounts on a country by county basis, and if this reporting is made public, then it will enable researchers to shed more light on the degree of tax haven use by multinational firms.”

1.      The Tax Justice Network is an independent international network launched in 2003. We are dedicated to high-level research, analysis and advocacy in the area of international tax and the international aspects of financial regulation. We map, analyse and explain the role of tax and the harmful impacts of tax evasion, tax avoidance, tax competition and tax havens. The world of offshore tax havens is a particular focus of our work. Our core goals are to create understanding and debate and to promote reform, especially in poorer countries. We are not aligned to any political party.

2.      Founded in 1895 and a University since 1966, Aston is a long established research-led university known for its world-class teaching quality, and strong links to business and the professions. Dr Chris Jones is a reader, and Dr Yama Temouri a senior lecturer, in the Economics, Finance & Entrepreneurship Department of Aston Business School

4.      Estimates of the global scale of multinationals’ profit shifting, and the resulting losses, are summarised here.

5.      The Journal of World Business (JWB) is a premier journal in the field of international business with a history dating to 1965 with the founding of the Columbia Journal of World Business. JWB publishes cutting-edge research that reflects important developments in the global business environment and advances new theoretical directions and ways of thinking about global phenomena: https://www.journals.elsevier.com/journal-of-world-business/