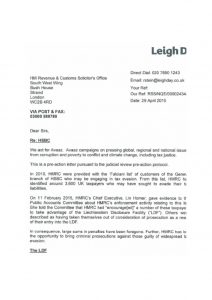 “The UK tax authority faces a potential judicial review over its handling of the evasion scandal involving HSBC’s Swiss subsidiary, it emerged on Thursday. Lawyers acting for the international campaign group Avaaz have sent HM Revenue & Customs a letter asking for details of its decision to allow hundreds of suspected tax evaders to make use of an amnesty, in the first step of the potential legal challenge.
. . .
The move comes amid widespread public anger overrevelations of tax evasion involving HSBC’s Geneva operations, which have led to a single prosecution.”

The Guardian has the letter, in full.

This is excellent news, and a superb and necessary initiative.

It really looks bad: the letter notes an official from HMRC [the UK tax authorities] who testified that HMRC had ‘encouraged’ taxpayers who had been discovered on the “Falciani” HSBC list to make use of the amnesty to escape punishment. Instead of prosecuting tax evaders, it looks as if HMRC  cooked up an amnesty for their wealthy chums.  That is an astonishing move, if you think about it.

What official action could more clearly say ‘there is one set of rules for the wealthy, and another rule for everyone else?’ What clearer demonstration of ‘political capture’ and the ‘finance curse‘ is there?

“Tax officials must urgently explain why they gave ‘get out of jail free’ cards to so many wealthy tax dodgers.”

The letter contains other astonishing facts and outrages.

It just looks appalling, from top to bottom. Congratulations to Avaaz for taking a serious swing at this disgraceful situation.