Philip Goff ■ No it’s not your money: why taxation isn’t theft 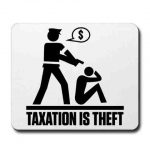 A guest blog by Philip Goff.

Many political arguments start from the assumption that taxation is the government taking ‘our money’ off us. When austerity hit the arts in 2011, Dr Steve Davies of the pseudo-think-tank the Institute of Economic Affairs argued on Channel Four news [TJN: a mainstream UK television current affairs programme] that the 20% cuts to the arts didn’t go far enough: art funding should be entirely abolished on the grounds that it’s unfair to take people’s money off them by force to pay for something they may not want. Again and again the economic right stoke resentment at the state allegedly taking what’s ours by force, and use this resentment to build support for a programme of small government.

But even those who believe in relatively big government tend to share this understanding of taxation as the appropriation by government of ‘our money’. Most on the economic left start from the assumption that it is all things being equal a bad thing that the state takes our money from us, but hold that this prima facie bad is justified by the public goods which taxation makes possible. Well-meaning [UK] public intellectual Alain de Botton encourages us to think of taxation as charity: we give up what’s ours for the greater good of our society.

So both sides tend to agree that one has some kind of right or entitlement to one’s pre-tax income. The economic right believe that the right to pre-tax income is inalienable, or at least that it is trumped only by the absolute necessity of providing the basic requirements of society, such as roads and rule of law. In contrast, the economic left tend to value the good of making society more equal, or of providing a basic standard of living for all, above the good of letting people keep their own money.

This feeling that your pre-tax income is ‘your money’ is difficult to shake. It’s hard not to see the pre-tax figure on your payslip as representing what’s really owing to you for the work you’ve done, and hence to feel that the state is taking away from you something that is yours by right. However, a little careful reflection shows this almost universal assumption to be utterly confused. There is no sense in which you have a right to your pre-tax income.

To see this, we have to ask what kind of right it might be supposed one has to one’s pre-tax income. Presumably, it is either a legal right or a moral right. Once we separate out these alternatives, we can see that the former option is incoherent, whilst the latter is utterly implausible.

You clearly don’t have a legal right to your pre-tax income, as you are legally obliged to pay tax on it. This is a simple analytic truth that follows from the definition of taxation. People who don’t take pay their taxes go (or at least legally ought to go) to gaol.

Perhaps there are specific cases in which a person happens to deserve their pre-tax income; these would be rare and happy co-incidences in which the market happens to deliver exactly what is deserved. But the mere fact that your pre-tax income is £X does not entail that in any morally significant sense you are entitled to £X. The money the market happens to throw at you is not necessarily the money you deserve. No doubt you have worked hard for that money; no doubt you have made a contribution to the public good; you have special talents that others lack, etc. But others also work hard/are talented/make a contribution, and the market has not taken these morally significant factors into consideration in working out what to give to whom. For better or worse it’s almost certainly not fair that you have what you have relative to what others have got.

It’s the responsibility of law makers, then, not to respect pre-tax incomes, but to disrespect pre-tax incomes. Insofar as the market fails to yield a just distribution of incomes, the state should work to correct that distribution. Of course, to some degree the scope for such correction will be limited by economic realities. The pragmatic argument between right and left as to the relationship between tax levels and incentives to work or invest is a perfectly sensible one. But it is crucial to distinguish the pragmatic argument of the economic right, ‘We must lower taxes in order to encourage investment’, from the moral argument of the economic right ‘We must lower taxes in order to give people more of their money’. The former argument is based on an empirical claim which stands or falls with the data. The latter argument is based on the wholly confused notion that there is something morally significant about the distribution of incomes the market happens to have thrown up.

Your pre-tax income isn’t the money you deserve; it is the money the amoral market has gifted you. A government may have cause to respect the whims of the market as a matter of practical necessity. But the state has no moral reason to respect the whims of the market. The only legitimate bar to redistribution is economic reality. Any politician who thinks it a good thing, in and of itself, to give people more of ‘their money’ is confused.

(A similar argument is made at length in ‘The Myth of Ownership’ by Murphy and Nagel, published by Oxford University Press).

See more on this topic in Tax Justice Focus, 2010.

Philip Goff is Associate Professor of Philosophy at the Central European University. He has research interests in consciousness, the ethics of taxation, and fictionalist interpretations of religious practice. He writes at Conscience and Consciousness. Also see www.philipgoffphilosophy.com and is @philip_goff  on Twitter.