Nick Shaxson ■ Swiss whistleblower Rudolf Elmer: ‘they want to crucify me, as an example to other bankers’

Elmer (right) in a symbolic handover of data to Julian Assange

Rudolf Elmer, the Swiss whistleblower who has been pursued by Swiss courts for a decade and served over half a year in prison while accused of (according to Switzerland’s peculiar courts) violating the Swiss banking secrecy law, now faces two more court trials: one, on June 23rd, as part of the ongoing case for which he has already been in prison; and one on June 24th, relating to the symbolic handover of a data file to Julian Assange at the Frontline Club in London.

Journalists, save the date: June 23 and June 24. Though the Brexit vote will dominate media coverage around that time, don’t forget Elmer.

In an email to TJN last week, Elmer said:

“I really think that Zürich’s financial centre and Zürich’s justice wants me to be cruficied at Paradeplatz in Zurich, in front of UBS, Credit Suisse, Julius Baer and HSBC, in order to threaten other bankers.” 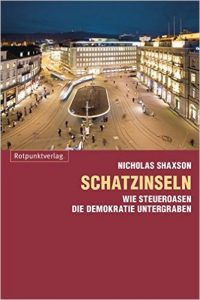 Paradeplatz, as advertised on a TJN-related book

Paradeplatz in Zurich, in the picture here, is the world headquarters for Credit Suisse and UBS, and contains offices of many financial sector players.

We cannot stress strongly enough – do go and look at the detailed evidence – that Switzerland appears to have corrupted its courts system, in order to nail him. (In short, he is accused of breaking Swiss bank secrecy, even though he wasn’t in Switzerland at the relevant time, and he wasn’t working for a “Swiss bank” under the relevant definition in the law. The courts have selectively refused to consider large sections of evidence.)

His forthcoming trials follow a number of severe attacks on whistleblowers against tax havens recently. Beyond Elmer, there is the case of Luxleaks whistleblowers Antoine Deltour, Edouard Perrin and Raphael Halet (read this excellent article for a summary of Luxembourg’s corrupt financial machine in action;) the Mossack Fonseca/Panama Papers case, where there appears to be a whistleblower arrest; the Hervé Falciani case (where, again, the whistleblower has got it in the neck;) and now – much less well known in western circles – the case of Hernán Arbizu in Argentina, apparently a JP Morgan whistleblower. As Argentina’s Pagina 12 summarises:

“The bankers who launder and flee seem to get protection, and those who expose them are condemned. Arbizu’s whistleblowing ends with his arrest and extradition.”

We asked Elmer for his reaction to the difficulties facing other whistleblowers, and he said, firstly in response to the Luxleaks whistleblower scandal:

“This case clearly shows again that any judicial system is a tool of  the powerful oligarchs and multinationals in a country, and the judges have to bend and stretch the law in a way that fits the purpose and liking of the powerful. If the interests of the powerful are at risk, the rule of law will be bent or even ignored while the man in the street eventually pays the bill.

In the case of my family and me, we had to go into exile to Mauritius in 2006 because I would not have found a job in Switzerland: I was called a thief, a blackmailer, a terrorist, a mentally ill person etc. — and on top of this, my family was stalked for more than two years, unprotected by the Swiss police or a witness protection program. I was made an outlaw: an enemy of Switzerland, and it seems that in a certain part of Swiss society I will be called this for the rest of my life.”