John Christensen ■ New Oxfam report: An Economy For the 1% – and how to reform it

In a new report on inequality, published today, Oxfam reveals that the richest one percent of the global population now owns more wealth that the rest of the world combined. In 2015, just 62 people had more wealth than the poorest half of the world’s population, and that figure has fallen from 388 individuals as recently as 2010, giving clear indication of the extent to which wealth has concentrated in the hands of a tiny minority since the the financial crisis. According to Oxfam:

“The global inequality crisis is reaching new extremes. The richest 1% now have more wealth than the rest of the world combined. Power and privilege is being used to skew the economic system to increase the gap between the richest and the rest. A global network of tax havens further enables the richest individuals to hide $7.6 trillion. The fight against poverty will not be won until the inequality crisis is tackled.”

Oxfam’s report will undoubtedly receive massive media coverage in the coming days, but we would urge you to read the report in its entirety and not rely on media pundits to spin the story one way or another.

Two charts from the report caught this blogger’s attention. The first chart shows the long term decline in almost all countries (some Latin American countries have bucked the trend in recent years) of Labour’s share of national income.  Despite huge advances in education and training, real wages have failed to rise in line with productivity increases and workers are losing out to owners of capital and to CEOs, with the latter helping themselves to astonishing pay awards.  As Oxfam notes:

“Not only are wages failing to adequately reward workers for their efforts, but wages are also failing to meet the income needs of individuals and families. In the European Union, nearly 9 percent of people in employment are at risk of poverty, and this rate has increased over the past decade.” 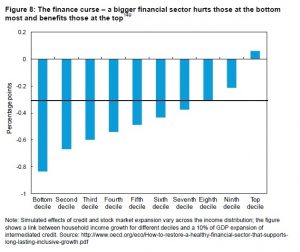 The second graph that caught our interest – and not only because its title echoes our work on the subject – explores the link between an over-sized financial services sector and the development of an economy as a whole.  Consistent with TJN’s findings, the graph shows that the benefits of hosting a large and dominant finance sector accrue solely to the top ten per cent, while the lowest income earners are harmed to greatest extent. Overall, the Finance Curse harms the host economy and crowds out other productive sectors.  As Oxfam explains:

“In addition, the economies of countries with a large and dominant financial sector have been found to grow more slowly over time than those that are more balanced, as the dominance of finance crowds out other productive sectors.”

To make matters worse, hosting an over-sized finance sector not only harms the host economy, the damage spills over to other countries as the financiers extract wealth (a polite way of saying pillage).  In the words of the Oxfam report:

“Globally, the growing financial sector is also having an impact on economies beyond those where it currently dominates. In emerging markets, where there is still a great need for increased access to finance for the majority of citizens, there are already worrying signs that the sector is serving financiers and shareholders by working with high-margin corporate businesses, rather than providing services for the broader economy.”

Read the report for yourself and draw your own conclusions, and also read here about why inequality is so harmful to human welfare, but this blogger would like to conclude with a comment arising from an interview with a UK-based journalist who called this morning and asked whether the Oxfam report confirms the failure of neo-liberalism.

“Not at all”, I replied, “neo-liberalism was driven by a small coterie of economists and others who were unashamedly promoting the interests of the wealthy elite.  They have succeeded in their mission.”

One of the more strident of the neo-liberals was Austrian (later USA) economist Ludwig von Mises – a leading thinker on the US brand of libertarianism – who in a letter to author Ayn Rand wrote:

“You have the courage to tell the masses what no politician told them: you are inferior and all the improvements in your conditions which you simply take for granted you owe to men who are better than you.”

Von Mises was bitterly hostile to any notion of wealth or income redistribution, even to the extent, according to Milton Friedman, of describing the participants at the initial meeting of the Mont Pelerin Society as a “bunch of socialists.”