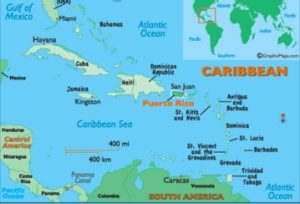 Puerto Rico is a peculiar historical relic, whose relationship with the United States has strong echoes of the half-in-half-out relationships that the British Overseas Territories and Crown Dependencies enjoy with the mother country, the United Kingdom. This halfway-house link, which provides solid constitutional and legal bedrock for financial investors while allowing all sorts of tricksy carve-outs from the the mother country’s laws and rules, is fertile ground for tax havenry.

Puerto Rico is a U.S. territory in the northern Caribbean which, according to the U.S. Supreme Court, is

As a result of this and other anomalies Puerto Rico is, among many other things, a tax haven, as our Offshore Wrapper just noted. And it is, rather like Britain’s own crooked little tax haven Jersey, going bust.

A superb recent article by David Dayen in The American Prospect lays out the key issues. It begins:

“This is a distress call from a ship of 3.5 million American citizens that have been lost at sea,” Puerto Rico Governor Alejandro García Padilla said on December 1, begging the Senate Judiciary Committee to help protect his homeland from an unspooling disaster. After issuing bonds for over a decade on everything not nailed down, Puerto Rico now carries $73 billion in debt, a sum that García Padilla had termed “not payable” in June. Successive governments have enacted punishing austerity measures to service the debt, despite a stubbornly depressed economy and poverty rates near 50 percent. Now, after defaulting on smaller loans, it’s likely that much of the $957 million due January 1 will go unpaid, bringing more chaos and suffering at the hands of Puerto Rico’s creditors.”

One could point to many other things in the story, but we’ll point to just three.

First, like Jersey, Puerto Rico’s disaster stems in part from an earlier phase of tax havenry, and a long-overdue crackdown on these abuses in the country that was being abused by its tax havenry – in this case the United States. The crackdown revealed a lack of a plan B, and it is of course ordinary citizens who will be bearing the brunt.

A second aspect of this story, which you’ll have to read the whole article to appreciate the gory details, is this.

“Puerto Rico’s idea of economic development in recent years has been to bribe the wealthy to come to the island. Acts 20 and 22, passed in 2012, tax corporate profits on hedge funds at just 4 percent, and grant personal tax exemptions on dividends, interest, and capital gains. Because Puerto Rico is a U.S. territory, Americans seeking the benefits don’t have to renounce their citizenship; they just have to spend over half their time on the island.”

“Puerto Rico is just the latest battlefield for a phalanx of hedge funds called “vultures,” which pick at the withered sinews of troubled governments. In Greece, Argentina, Detroit, and now Puerto Rico, vultures have bought distressed debt on the cheap, and then used coercion, threats, and legal action to secure a massive windfall, compounding the effects on millions of citizens.

The legal wrangling masks an irony: As creditors demand that Puerto Rico pay back everything it owes, hedge fund managers have used the island as a tax haven to avoid their own responsibilities. Wealthy investors don’t just want to make money in Puerto Rico; they want to use their leverage to effectively buy an island playground.”

Who would ever expect loyalty from offshore players? One is nicknamed “The Terminator,” because he just keeps coming after distressed debt.

How do the hedge funds propose to make money off this distress?

“The hedge funds’ main plan for a resolution appears to be sticking it to the island’s citizens. In July, they hired former IMF official Claudio Loser to write a paper suggesting that Puerto Rico can fix the debt crisis without defaulting. The recommendations in the paper included firing teachers, increasing regressive sales taxes, rolling back labor laws like overtime and vacation benefits, slashing the minimum wage, and privatizing public assets. Loser threatenedlawsuits and “a long period of uncertainty” for Puerto Rico if they tried to avoid paying their debts.”

Make the islands more ‘competitive’ again, and you will be able to attract hedge fund investors again! It’s a brilliant plan, and given the hedgies’ influence, it might just work.  In fact, such is their influence that former U.S. Treasury Secretary Larry Summers was moved to write an article in the Washington Post entitled Puerto Rico is a test of whether financial interests control Washington.

But here’s a crucial aspect of this that tells us so much about how offshore finance works. Bear with us on this.

“More than 200 traders have already moved to Puerto Rico, and the biggest evangelist for this scheme is hedge fund manager John Paulson, who has called the island “the Singapore of the Caribbean.” Paulson’s investments in Puerto Rico include Banco Popular, the island’s largest bank, and more than $1 billion in beachfront resort property, including the Condado Vanderbilt, the La Concha Renaissance, and the St. Regis Bahia. Paulson & Co. has expressed interest in constructing additional resorts on what are currently parking lots.

Other funds have followed Paulson’s lead. Stone Lion Capital, which raised $500 million to invest in Puerto Rico, has considered opening an office in the tax haven. Fortress Investment Group already has an investment company there. Knighthead Capital’s Tom Wagner told Bloomberg, “Puerto Rico is really an amazing untapped resource that should be attracting a lot of capital.” Real-estate agents claim there are not enough high-end properties to satisfy demand from the new millionaire invasion. Financial interests are also trying to purchase the government. “They’re contributing to political campaigns of people that don’t believe in Chapter 9, don’t believe in restructuring the debt,” says Natal. “That’s the last piece of the puzzle.”

Our emphasis added. You can bet there are all sorts of hidden ‘conflicts’ here – whether ‘payments’ (such as gifts or discounted sales of stakes alongside the hedge funds in entities or arrangements that would profit from screwing Puerto Rico) or other inducements via secret offshore accounts – to “encourage” members of legislatures to do the hedgies’ bidding. This reminds us of a section from Treasure Islands, revealing how long-established this kind of corrupt practice is:

“Economist Michael Hudson described how he was hired in 1989 by a Boston money management firm to organise a sovereign debt fund investing in the government bonds of developing nations. Huge risk premiums then meant that Argentine and Brazilian dollar bonds were yielding almost 45 percent, while Mexican bonds were yielding 25 percent. In its first year the fund, incorporated in the Netherlands Antilles [then a prominent U.S. corporate tax haven], became the world’s second best performing  of its kind. Hudson found out what was happening. “The biggest investors were political insiders who had bought into the fund knowing that their central banks would pay their dollar debts despite the high risk premiums,” he said. Some of the biggest investors were people in top positions in central banks and governments. “We realised who has all the Yankee dollar claims on Latin America,” he said. “It was local oligarchies with offshore accounts. The dollar debt of Argentina in the early 1990s was owed mainly to Argentinians operating out of offshore banking centres. The major beneficiaries of foreign debt service were their own flight capitalists, not bondholders in North America and Europe.
. . .
Wealthy foreign investors buy up distressed sovereign debt at pennies on the dollar – typically at a 90 percent discount – then reap vast profits when those debts are repaid in full. one trick is to make sure that influential locals are secretly part of the investor group buying the discounted debt: these locals will then do battle inside the developing country governments to make sure the debts get paid in full. Their involvement, of course, must be hidden behind a shield of offshore secrecy, so that the impoverished nation’s citizens can never find out how their nation’s wealth was stolen.”

Oh, and on top of all this, the hedge funds are screwing all their outside investors too, and they are collectively worse than useless at generating returns for investors, a point recently reinforced by newly disastrous performance.

And these people are being lionised as the cream of high society.