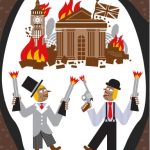 From Aditya Chakrabortty in the UK’s Guardian newspaper: some statistics that are classics of the “Finance Curse” analysis – where an oversized financial centre begins to weigh on the rest of an economy, rather than to support it.

“A giant sucking sound can be heard in the UK today: the sound of public money and private wealth being sucked down south to London.”

Well, for starters, there’s this remarkable statistic he cites, from a report a couple of years ago by the IPPR North think tank. Transport spending, they found, was:

That is, a ratio of over 500 to one between London and the North East.

And that, of course, is not all. It’s a symptom of, among other things, ‘political capture’ by the dominant financial centre.

Recently Adam Leaver of Manchester Business School wrote an article for our newsletter Tax Justice Focus, in which he described the contrast between UK politicians’ “morally-laden discourse about the unfair subsidies received by the regions and the rights of Londoners to keep more of ‘their’ income” and the hard reality of financial flows within the economy, involving quite the reverse picture.

This reversal of the flows of fortunes involves two things, which are quite hard to discern or understand.

The first is the shift away from the manufacturing of things towards the manufacture of credit – including oceans of profitable and taxpayer-subsidised lending out of London to the rest of the country – and the other is the large-scale privatisation and the extension of public-private partnerships. As Leaver put it:

“London does attract capital, but it does so because it is a kind of conversion machine, taking national and international assets, converting them into revenue streams from which well-placed individuals skim high pay. In other words: London attracts capital because it is also extractive.”

The result, Leaver explains, is what he calls “the Metropolitanisation of Gains, and the Nationalisation of Losses.”

“Remember Boris Johnson‘s declaration of 2012: “A pound spent in Croydon is of far more value to the country than a pound spent in Strathclyde.” London is where the big-boy jobs are, runs this line – and the companies who create them.

Except that this ignores how the rest of the UK pays for London to enjoy that wealth. Take the public-private partnerships and PFIs used from John Major onwards to build and run hospitals, schools and transport services. Adam Leaver, at Manchester Business School, looked at 657 UK companies involved in PFI/PPP deals between 2004 and 2012. Of all these schools and other public facilities being laid on across the country, 75% of the firms operated out of London and the south-east; 83% of the revenue went to one corner of the UK.

Take St Mary’s Hospital, Manchester, part of a £500m redevelopment project in that city of health facilities. The shareholders: all from London or Kent. The various legal and financial advisors: all from within the M25. Of the five contractors, only one is from Manchester.”

But there is something else, too. It’s not just London versus the rest. It is, as he continues:

“the rest of the country versus a small elite in London”

Perhaps one of the most dramatic illustrations of this is the so-called 90:10 ratio within London – on page 216 of this report. It tells us that the best off 10th of the population inside London are at least 273 times better off than the worst off tenth (and that ‘at least’ is a gross understatement, because of the way the 90:10 ratio is calculated).

These are just a few of the economic aspects of the Finance Curse, as it applies to Britain. And that’s without even getting into the corrupted politics of it all. To finish, back to the Guardian:

“Britain’s business model is built on taking wealth and power from across the country – and handing it to a small cabal of financiers and businesspeople in central London.”

Hyperbole? Well, explore the issue further, and make your own mind up. If you’re British, this has to be one of the most pressing issues of the modern age.

That great sucking sound – and all that poverty. Perhaps it’s time to call London “Hooverville.”[/vc_column_text][/vc_column][/vc_row]