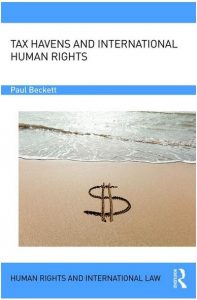 Tax havens cause enormous damage, not least because they block governments from fulfilling their human rights obligations.  When rich people and powerful businesses evade paying taxes by using offshore tax havens they deprive states of the revenues they need to deliver on their commitments to provide education, health, justice and security.  In this forthcoming book, Isle of Man-based lawyer Paul Beckett takes a human rights-based approach to the uses of tax havens and considers how the governments of tax havens actively connive with the process of breaching human rights.  This ground-breaking study is scheduled for publication in December 2017, and will be a welcome addition to the growing literature on this subject.  The author has provided us with the following description of the book:

Isle of Man and English lawyer Paul Beckett has opened up a new field of study which has wide social implications, with the forthcoming publication of “Tax Havens and International Human Rights Law” (to be published by Taylor & Francis in December 2017, as one of a series of six works on human rights by various authors under the general editorship of Professor Surya Subedi QC of Leeds University). Paul, who in 2015 was awarded a Master of Studies in International Human Rights Law from New College, Oxford (where, at Worcester College, he read Jurisprudence in the mid-Seventies) is an expert on tax havens and their impact on the human rights continuum.

The book sails in uncharted waters. It takes a human rights based approach to tax havens, and is a detailed analysis of structures and the laws which generate and support these. It makes plain the unscrupulous or merely indifferent ways in which, using tax havens, businesses and individuals systematically undermine and for all practical purposes eliminate access to remedies under international human rights law. It exposes as abusive of human rights a complex structural web of trusts, companies, partnerships, foundations, nominees and fiduciaries; secrecy, immunity and smoke screens. It also lays bare the cynical manipulation by tax havens of traditional legal forms and conventions, and the creation of entities so bizarre and chimeric that they defy classification. Yet from the perspective of the tax havens themselves these are entirely legitimate; the product of duly enacted domestic laws.

The book is not a work of investigative journalism in the style of the Pulitzer Prize-winning authors of the Panama Papers, exposing political or financial corruption, money laundering or the financing of terrorism. All those elements are present of course, but the focus is on international human rights and how tax havens not merely facilitate but actively connive at their breach. The tax havens are compromising the international human rights legal continuum.

The book is structured as six self-contained chapters, which can be read in any order, and a seventh chapter setting out the author’s suggestions for future directions of study and for steps which governments and non-governmental organisations may wish to consider taking to curb the abuses which the book has identified. The chapters define tax havens, review the strategies and structures which tax havens employ, focus first on the avoidance of beneficial ownership and then on tax avoidance and evasion, and conclude somewhat counter-intuitively with detailed examinations of the Isle of Man (which is found not to be a tax haven) and Switzerland (which is the grandfather of tax havens).