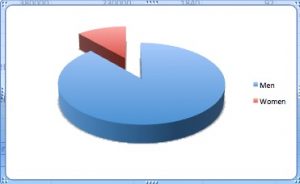 Sharing out the proposed tax cut from 45 to 40 percent

From The UK’s Mirror newspaper:

“If George Osborne [the UK Finance Minister] slashes the rate further in the Budget – from 45p to 40p for those on £150,000 or more – will put even more money in men’s pockets.

That’s counting the number of taxpayers affected. But now let’s ask how much of the £ value of this tax cut would go to women.

As in our simple picture here.

Here’s the calculation (scroll up to the top).

For the source data, and for some background discussion of what the numbers mean, please see our earlier blog.

Of course, households often include both women and men – so benefits to male higher earners will sometimes have knock-on effects that reduce the immediate gender inequality impact. We still lack good data on this point, but it’s clear that if you have any concern with gender inequality, you certainly wouldn’t start by cutting tax for the highest-earning men in the hope of some kind of gender ‘trickle-down’.

And of course this is based on latest available data which is from 2013-14, and this tax cut being mulled is for the future. If the threshhold for the top rate of income tax were changed, that would change the calculation too. So this is not a precise forecast, but we think it’s a pretty good indication.

Having said all this on the revenue side, it’s worth noting that women get hit by tax cuts on the spending side too. As the Mirror summarises:

“A House of Commons library analysis of Mr Osborne’s 2015 autumn statement found it hit women three times harder than men because of the cuts to benefits and tax changes.”

That study is summarised here. See more on our gender and tax justice page.