John Christensen ■ People’s Parliament to discuss How Corrupt is Britain? 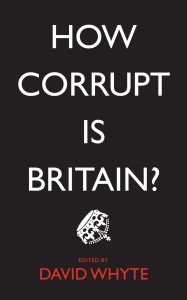 On Thursday 26th March 2015, the People’s Parliament will meet at Westminster in London to discuss a complex question, How Corrupt is Britain?

British people have long prided themselves on having a relatively corruption-free liberal democracy.  Corruption, as the old saying goes, is something that happens in another country.  Well that depends on how you define corruption. Next week sees the launch of a damning new book, edited by sociologist Professor David Whyte, which explores the roots of a large accumulation of evidence that all is not well with the powerful institutions that control Britain.

The charge sheet makes for depressing reading, ranging from corrupt practices within Parliament itself, which has suffered one corruption scandal after another in the past ten years (see here, here and here, for example), to the newspapers (here and here), the police forces, the City of London’s LIBOR and foreign exchange scandals, insurance selling scams, football match rigging, Britain’s tax haven empire, dodgy privatisations and PFI deals, and a steady drip drip of stories – typically generated by civil society and a handful of intrepid investigative journalists – revealing not so much a few rotten apples (the age old excuse) as a steady degradation of the public institutions which previously acted as checks on abuses in the private and public sectors.

The problem, as we well know, is that the public sector in Britain and elsewhere, has been degraded by the neo-liberal project to such an extent, and the public interest has become so closely inter-twined with private sector interests, that those checks and balances no longer function. As George Monbiot comments in the Guardian:

“For organisations such as the World Bank and the World Economic Forum, there is little difference between the public interest and the interests of global corporations. What might look like corruption from any other perspective looks to them like sound economics. The power of global finance and the immense wealth of the global elite are founded on corruption, and the beneficiaries have an interest in framing the question to excuse themselves.”

TJN has long argued for a very different framing of corruption to take account of the practices which we would regard as corrupt and corrupting of those who operate at the interstice between the public and private, PwC being a prime example.  In the past we have been critical of the Corruption Perceptions Index, which starts from a very narrow definition of what constitutes corruption and then builds on the perceptions of a rather narrow interest group to point fingers at corrupt public officials in poorer countries.

This blogger’s paper titled Mirror Mirror on the Wall, Who is the Most Corrupt of All? took a swing at the CPI in 2007, and in another blog posted today, TJN’s Alex Cobham argues that the CPI is simply counter-productive and should be killed off.  But the CPI remains a powerful weapon used by the World Bank to enforce the very reforms (privatisation, deregulation, tax cuts targetting the corporate sector, cutting state budgets, PFIs, etc) which have led to Britain’s current predicament.  As Monbiot notes:

“How Corrupt is Britain? argues that such narrow conceptions of corruption are part of a long tradition of portraying the problem as something confined to weak nations, which must be rescued by “reforms” imposed by colonial powers and, more recently, bodies such as the World Bank and the IMF. These “reforms” mean austerity, privatisation, outsourcing and deregulation. They tend to suck money out of the hands of the poor and into the hands of national and global oligarchs.”

This is the context in which a fresh debate about corruption needs to occur.  Corruption has become more entrenched in most countries, yet we still fixate about bribe taking by public officials in the South while ignoring the far greater corrupt practices going on in the North.  Worse, the World Bank and other international institutions are still trying to force their failed remedies on countries which don’t enjoy the depth of civil society independence which yet survives in Britain, and without which the vast majority of corrupt practices in Britain would never have been exposed.

Join the debate at the People’s Parliament next Thursday at 18h30.  Register here.