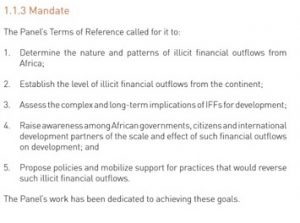 Former South African president Thabo Mbeki panel has presented the findings of his panel to the African Union summit, where they were adopted directly into the declaration. Now, we’re biased for all sorts of reasons (more on that below), but this is an historic moment – and probably the most important report yet produced on this issue.

In 2011 the UN Economic Commission for Africa was directed to establish a High Level Panel on Illicit Financial Flows out of Africa. The panel’s mandate (see box) contains five elements: the first three relating to improved knowledge of illicit financial flows (IFF), the last two to bringing about political change to curtail them.

In both areas, it’s reasonable to conclude that the panel has exceeded expectations. Although only time will tell just how much change has been catalysed, the initial evaluation is largely positive. In terms of moving forward understanding, the panel got important things right in relation to each aspect of the mandate:

1. On the nature of IFF: The analysis goes beyond the simple breakdown of tax/money-laundering/corruption, to show a more detailed typology; and recognised the range of possible definitions of IFF, and the central role of financial opacity in allowing flows to be hidden;

2. On the scale of IFF: Importantly, the panel didn’t just take existing IFF estimates for granted. They carried out their own, original analysis of trade mispricing; and they commissioned new research to explore the risks of IFF through financial opacity in African countries’ trade and investment links (a complementary approach to that of seeking dollar estimates of scale);

3. On the impact of IFF: The analysis is careful to look beyond simple dollar scale, or revenue impacts, and focuses rightly on the likely longer-term governance and state-building implications; and highlights the regressive distributional implications.

[Full disclosure: TJN’s Alex Cobham, with Alice Lépissier of the Center for Global Development contributed analysis in each area, most visibly in 1 and 2.]

The Panel has devoted much time to building a political consensus across the continent. This is particularly important in respect of recommendations which require national and regional action – so that, for example, significant diplomacy with Mauritius has proceeded statements such as this:

If a slower pace of progress has been the price paid for the strong support that saw the report immediately adopted by the AU heads of state, it was a useful trade-off. The 15 findings (below) in chapter 4 and the specific recommendations in chapter 5 which follow them include a welcome focus on African steps – welcome because the problem of IFF cannot be solved by international action alone (e.g. important issues such as the transparency and evaluation of tax incentives provided for multinationals are overlooked in international discussions), and because of the legitimacy that this ensures for the demands that are then made for international action.

Overall, the recommendations provide a comprehensive basis for progress, closely derived from the analysis. The final section of recommendations is labelled “E. Further responsibilities of Africa’s partners”, and includes a powerful combination of more and less familiar ideas. Among the more obvious are for the publication – not just the collection – of both the country-by-country reporting of multinational companies, and the beneficial ownership of companies, trusts and other legal entities.

Interestingly, the first recommendation in this section is a less familiar one:

The Panel recommends that the Bank for International Settlements publish the data it holds on international banking assets by country of origin and destination in a matrix format, along the lines of the data published by the IMF for bilateral trade; foreign direct investment and portfolio investment, so that it can inform the analysis of IFFs from Africa.

It is increasingly anachronistic for a major international regulatory body to collect, but then to obscure, such important bilateral information. We look forward to the response of the BIS.

The Mbeki panel has delivered a broad report, adding substantial value in its analysis of African IFF and setting out a powerful policy agenda. Notwithstanding contributions from international civil society and researchers including our own, the process and the outcome represent the first, comprehensive African policymakers’ response to illicit financial flows.

While the last two years have seen major progress in G8 and G20 meetings, this African Union position provides a loud voice to a region that has been largely excluded from those processes. Unsurprisingly, while the issues overlap, the priorities are not identical.

The fifteen findings of the AU report: