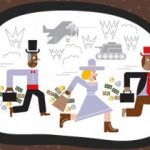 Moves by the Swiss National Bank to remove the Swiss Franc’s currency peg to the Euro has prompted a new round of turmoil in global foreign exchange (FX) markets. We’ve already written about this from a tax justice perspective, but here’s something else.

Quite a few currency brokers have gone under in the latest storm, and several are under threat. Today’s Financial Times comments on this:

“it is the large number based in Cyprus and offshore that has thrown open a debate over one of the more shadowy areas of the City, which allows private individuals to use internet trading platforms to speculate on currency markets for slender stakes.”

This gets to the core of an issue we’ve written about at great length, for some years: the role that offshore tax havens or secrecy jurisdictions play in fostering financial instability.

Retail currency trading had grown from a tenth of the London market in 2008 to a fifth by 2010, and presumably more since then. And why are they offshore? It’s the lax financial regulation, of course!

“Yet the majority of these operators in the UK are not based in the country, instead operating in offshore locations where they can operate away from the scrutiny of the UK’s market regulator, the Financial Conduct Authority.”

Lax financial regulation is a hallmark of the offshore system. It’s part of the business model: create a libertarian, rules-free, tax-free, scrutiny-free environment, and the dodgy players will come. They – and the offshore jurisdiction taking a small fee from each player — will take the cream but heaping the risks onto everyone else involved.

Cyprus is fingered as particularly dodgy: according to the FT, of the 73 foreign-based forex trading firms operating in the UK, 54 are based in Cyprus.

The offshore players are generally the more aggressive, the more unscrupulous, the more undercapitalised and overleveraged, and generally the more dangerous. In the UK and Cyprus, for instance, trades can be made using as much as 100-200 times the amount deposited into an account to magnify their trading positions, as the FT explains it: it adds illegal cold-calling, and so on. All of this is corrupting the integrity of markets.

And this forex trouble is just one more example of the trend of offshore centres contributing to financial instability and high-rolling.

If you want more examples of how this works, get an eyeful of this lot, and the archived stories at the bottom.