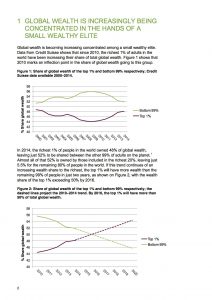 From Oxfam, a new briefing, based on updated Credit Suisse estimates. It contains the following factoids:

You may remember our recent blog in which we noted:

“In his new book – Why We Can’t http://www.buyambienmed.com/ambien-online/ Afford the Rich (Policy Press) – Andrew Sayer examines the truly wealthy and finds that the higher you go up within the top 1%, in other words moving beyond the top paid professionals into the realm of high and ultra-high net worth individuals, the more likely it is that these people will be involved in the financial and property sectors, and the greater will be their reliance on unearned income from capital gains, dividends, stocks and shares, and other financial assets.  They are also more likely to be predominantly men.”

The Oxfam report also notes, as the picture shows, a recent inflection point in 2010: before that year, the gap was narrowing slightly, whereas afterwards the trend (with Oxfam extrapolation) looks like this:

The report, furthermore, has recommendations, including these two, which are close to our core activities:

And don’t forget our report entitled Inequality: you don’t know the half of it. In general terms, the inequality studies are underestimating the scale of the problem, because so much wealth is hidden, offshore.