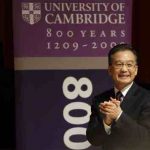 In March we wrote a post entitled Ukraine’s dirty money: the Cambridge University connection, which highlighted the fact that a Ukrainian oligarch who had showered money on Cambridge university to promote a “Cambridge Ukrainian Studies” department had just been arrested in Vienna on an international arrest warrant at the request of the FBI.

Now Cambridge University has been caught with its pants down (and trouser pockets open) again. A quote in Britain’s Telegraph newspaper  from an academic source  summarises the story:

“It would seem that a foreign government appointed a professor of politics at Cambridge.”

And who might this foreign government be? Well, the Telegraph story intro has more:

“A charity that gave £3.7?million to Cambridge University to endow a professorship for Chinese development studies is run by members of the family of the country’s former prime minister, Wen Jiabao, according to a well-placed source in Beijing.”

And this has a particular tax justice angle in that it involves those good old British vehicles for secrecy and obfuscation, offshore trusts.  The article continues:

“Cambridge has continued to deny that Chong Hua has links to the Chinese government and confirms only that it is registered to a trust in Bermuda. Bermuda law does not require details of a trust to be disclosed publicly and Chong Hua has no website or official listing anywhere in Britain or China. The Bermuda Monetary Authority said that “we do not supervise individual trusts”, adding that trusts were subject to international tax and money-laundering regulations.

Yeah right. If Bermuda doesn’t supervise Bermuda trusts, then who does?

A Cambridge spokesman said the donation was “fully verified and approved” but that the donors had requested complete anonymity.” But this case shows ever so clearly why that anonymity – which slipped on account of someone’s remark about some shareholdings – should simply not be permitted in such a case. As the academic continued:

“How, if the foundation’s money came from the family of the head of government of the People’s Republic of China for over a decade, and if the foundation was able to name the first occupant of the chair, can Cambridge demonstrate academic independence?”

A very good question indeed. One has to wonder whether Cambridge University has any more of these kinds of oligarchical skeletons hiding in its cloistered closets.

More irregularities concerning this donation – before the Wen Jiabao connection were known about – were raised by Al Jazeera in 2012.

What were they thinking?