Cross-posted with the Uncounted blog: a forthcoming paper in Economic Geography. 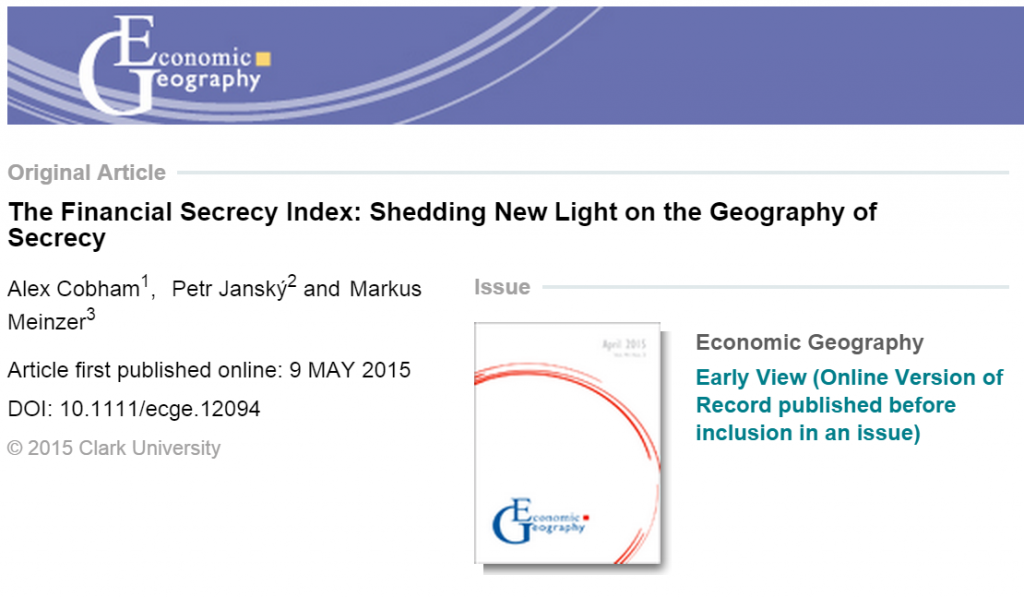 The Financial Secrecy Index is the Tax Justice Network’s flagship index of secrecy jurisdictions, or ‘tax havens’. The idea emerged from discussions at the World Social Forum in Nairobi, in January 2007.

In part, it came from frustration with a popular view of corruption as a ‘poor country’ problem – when all the analysis of experts in the Tax Justice Network showed high-income countries as central to financial crime.

And in part, it stemmed from recognition that the lists of ‘tax havens’ compiled by the OECD, IMF and others would never solve the problem – because the subjective, political nature of their processes meant that the jurisdictions left on the list were not the most dangerous, but merely the least powerful (the least able to negotiate their way off).

Since 2009, the Financial Secrecy Index (FSI) has been published biennially as a ranking of major secrecy jurisdictions. It combines a ‘secrecy score’ with a measure of global scale. The secrecy score reflects around 50 measures of financial secrecy, most compiled by international organisations. The scale measure reflects the importance of each jurisdiction in providing financial services to non-residents around the world.

Figure 1 shows how the main lists used have failed to capture the bulk of this activity – in most cases, including jurisdictions which in total account for a smaller share of global activity than the top ten by scale. Indeed, list-based approaches would in general have been more encompassing, and of equivalent financial secrecy, if they had simply listed instead the top ten of the FSI (by the combination of secrecy and scale). 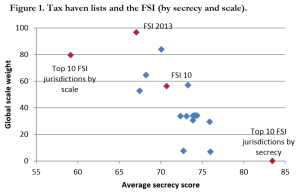 The 2009 G20 was probably the final high point for international policymakers trying to use tax haven lists to make progress. The one attraction was that it used an objective and relevant criterion (number of tax information exchange agreements), but set the bar so low that it was almost immediately depopulated, with no discernible impact – hence the academic assessment as a fairly dismal failure.

Since then, the importance of specific policies as required for progress on the FSI has come to dominate the international agenda (in rhetoric, if not yet in practice) – from automatic information exchange, to public registries of beneficial ownership.

The FSI itself has been used in a whole range of ways, including by central banks and international organisations, by rating agencies and in risk analysis, in a number of other indices, and now increasingly in academic studies.

Now a full paper on the FSI is being published for the first time in a leading academic journal, Economic Geography. Here’s the abstract:

Both academic research and public policy debate around tax havens and offshore finance typically suffer from a lack of definitional consistency. Unsurprisingly then, there is little agreement about which jurisdictions ought to be considered as tax havens—or which policy measures would result in their not being so considered. In this article we explore and make operational an alternative concept, that of asecrecy jurisdiction and present the findings of the resulting Financial Secrecy Index (FSI).

The FSI ranks countries and jurisdictions according to their contribution to opacity in global financial flows, revealing a quite different geography of financial secrecy from the image of small island tax havens that may still dominate popular perceptions and some of the literature on offshore finance. Some major (secrecy-supplying) economies now come into focus. Instead of a binary division between tax havens and others, the results show a secrecy spectrum, on which all jurisdictions can be situated, and that adjustment for the scale of business is necessary in order to compare impact propensity. This approach has the potential to support more precise and granular research findings and policy recommendations.

I was working at the Center for Global Development when this paper was being written, and the ungated version is published in their working paper series. 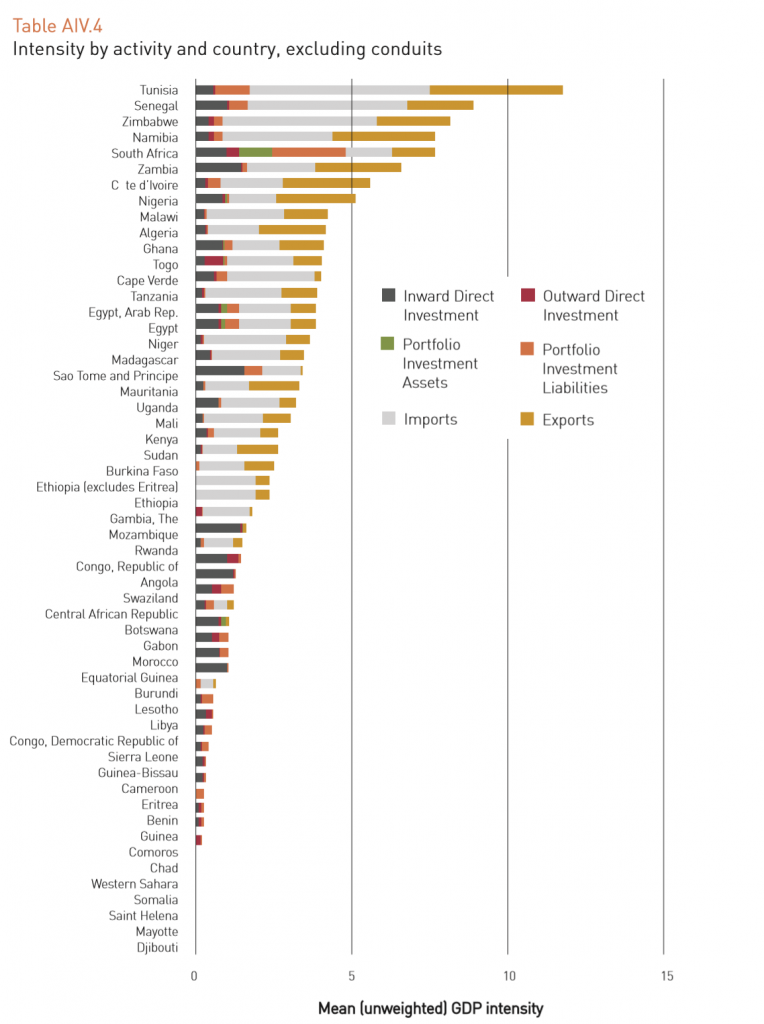 We hope that the FSI continues now to be used increasingly in research. We know of one major paper on the FSI which is forthcoming, and a number of applications are under discussion. These include the creation of measures of vulnerability to financial secrecy index, which were piloted in Thabo Mbeki’s high level panel report for the Economic Commission for Africa (the figure shows the relative intensity of financial secrecy of the partners for bilateral trade and investment for each country).

We plan a major evaluation of the index after the 2015 edition comes out in November, so we would warmly welcome comments and criticisms of the methodology.

We’re grateful to all who have contributed to the creation and construction of the index over the years, not least John Christensen, Moran Harari, Andres Knobel, Richard Murphy, Nick Shaxson and Sol Picciotto (who may have had the idea first, and certainly provided the whisky that drove the discussion).

And we’re grateful also for important funding to this work from the Ford Foundation, the Joffe Trust, Misereor and Oxfam-Novib; as well as broader support for dissemination and mobilisation from Norway and Christian Aid.

It’s not necessarily easy to fund work that challenges accepted intellectual positions directly. But it can be the only way that policy errors are undone.