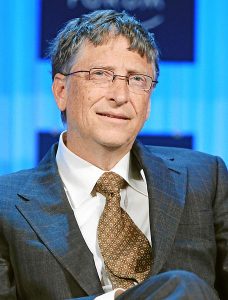 Via the Fools’ Gold blog:

A Bloomberg report on a Bill Gates interview:

‘Gates scoffed at comparisons linking taxes and regulation to slower growth. “The idea that there’s some direct connection, that all these innovators are on strike because tax rates are at 35 percent on corporations, that’s just such nonsense.” ‘

“The highest economic growth decade was the 1960s. Income tax rates were 90 percent.”

This is part of a much bigger picture: that low (or high) corporate taxes do nothing to make an economy as a whole more (or less) ‘competitive.’ Read more about all this here.

That reminds us of the views of other U.S. businesspeople.

I never made an investment decision based on the tax code…If you are giving money away I will take it. If you want to give me inducements for something I am going to do anyway, I will take it. But good business people do not do things because of inducements.

Who was this screaming left-winger? None other than Paul O’Neill, former Alcoa executive and U.S. Treasury Secretary under George W. Bush.

Yes, the very same Paul O’Neill as this one.

He is quite the one-man contradiction.

“I have worked with investors for 60 years and I have yet to see anyone — not even when capital gains rates were 39.9 percent in 1976-77 — shy away from a sensible investment because of the tax rate on the potential gain.”

For more on corporate taxes – much more – read this: 10 reasons to defend the corporate income tax.