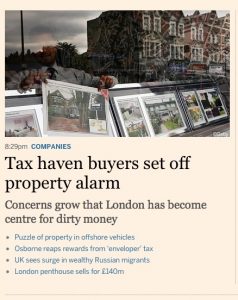 The current top story on the Financial Times website (at least at 8am UK time) is entitled Tax haven buyers set off property alarm in England and Wales. And it begins:

“At least £122bn of property in England and Wales is held through companies in offshore tax havens where ownership is difficult to trace, a Financial Times analysis of Land Registry data has found.

The figure – more than the total value of all housing stock in Westminster and the City of London – reveals for the first time the detail of the scale of offshore property ownership in the UK. It raises concern that London property in particular has become a haven for dirty money from around the world.”

Well, we’ve been raising the alarm about this for quite some time – and today’s TJN blogger wrote a long and detailed article in Vanity Fair not so long ago about this phenomenon, in which it cited Guardian research showing that some 95,000 offshore entities had been set up in Britain (or the U.K.) since 1999 purely to hold U.K. property.

But the FT analysis brings welcome raft of fresh data and analysis to the party. It said that the 122 billion figure was likely to be a big underestimate, given how much data isn’t available, and it found 91,248 foreign-company owned properties in England and Wales, of which two thirds were held by BVI and Channel Islands structures. These are classically opaque: the Vanity Fair research generally wasn’t able to see through the ownership structures of these properties, unless the information became available for some other reason (such as a court case). Take a look at this Land Registry document for one of the properties at One, Hyde Park in London to see the kind of information that is available (and, more importantly, not available.)

And the estate agents who handle these transactions often don’t know who is behind the transactions they are involved in. This obviously raises serious criminal and money laundering risks.

“When you have a company hidden offshore, it is I think almost impossible for your average estate agent to find out what on earth is going on,” says Peter Bolton King, global residential director at Rics. “You have to make a professional judgment whether you are satisfied with the information that you are provided with.”

The story, of course, raises the question of beneficial ownership information (of companies holding property, and of property itself) being made available, as any democracy would reasonably expect. The FT quotes UK Prime Minister David Cameron:

The UK government has pushed for greater transparency in corporate ownership, but David Cameron, prime minister, acknowledged that until such information was available in every country, the “cloak of secrecy that is allowing corrupt regimes to stash their money abroad under false identities” would never be lifted.

In fact, that’s arguably a misquote, and it feeds into one of the misunderstandings about all this. The quote as framed above would suggest that it’s pointless doing anything at all unless everyone acts. This is the classic tried and tested tax haven recipe for inaction. Fortunately, Cameron said something rather different:

“On the ownership of companies, the G-20 has agreed that companies should know who really owns and controls them and that tax collectors and law enforcers should be able to obtain this information easily. In the U.K., we have committed to making this information public. But we need others to do the same. Until this information is easily available in every country, we will never completely lift the cloak of secrecy that is allowing corrupt regimes to stash their money abroad under false identities.”

That fuller quote, including the crucial word ‘completely,’ is very different – and a far more optimistic view. This statement represents progress – and we know that we at TJN have played a role in getting this onto world leaders’ radar. And although we’ve disagreed with Cameron on many, many things – and we and others have pointed out (also e.g. here) that the beneficial ownership of companies reforms are likely to fall woefully short of what’s required – we are happy enough with the spirit of his actual quote, as far as it goes.

Overall, it’s great to see the Financial Times raising these issues – and those all-important questions. UK property is indeed a global centre for dirty money, and serious transparency reforms are needed.