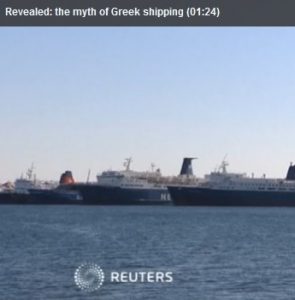 There’s a threat hanging over the Greek government. And it’s been hanging there for decades. An important new special report by Reuters’ Tom Bergin contains this:

“That’s the way Greek shipowners like it. The magnates who run one of the biggest merchant marine fleets in the world have long argued that if Greece tried to tax them, they would leave – and that their departure would devastate the economy. . . . Shipowners have resisted any effort to ditch the tax breaks they enjoy, and no government has dared touch them.”

It’s a threat that has seen their tax exemptions written into the Greek constitution since 1953.

And it’s a threat that raises an awful lot of questions.

For another thing, they claim it would ‘devastate the economy’ if they left. But would it? Here, Bergin does some good legwork. For one thing:

“Today, instead of Greek-based ships manned by Greek sailors, shipping in Greece is mainly made up of small management offices in Piraeus that collect freight fees on behalf of their tax-haven registered parents.”

The ships themselves hardly ever visit Greece, and to be honest much of the shipping-related work, such as insurance, gets done elsewhere. The management firms receive only a small share of the shipping fees.

Beyond this, though, the standard story goes like this: the shipping industry contributes to around 7.5 percent of GDP, once all ancillary parts are considered. This is supposed to be “bigger than tourism.” Bergin continues:

“But a Reuters analysis of corporate filings and economic data suggests shipping’s heroic role in Greece’s economy is largely a myth.”

And it’s a myth because these statistics include billions that never enter the economy. Things are counted which would never be counted in any other country.

“If Greece counted only payments to Greek companies and individuals – as other countries do – the deep-sea shipping industry’s contribution would be equivalent to around 1 percent of GDP.”

Now this is a little reminiscent of our Finance Curse analysis, where claims for the gross contribution of the financial sector – that part of the financial sector that is more internationally mobile and can also use the threat of relocation to get what it wants — tend to be significantly overblown, and offset by a range of other factors pulling in the other direction.

We don’t have time to do this story justice, but Bergin’s article is an important contribution on an important subject.