Nick Shaxson ■ TJN in The Economist: on the precious corporate income tax 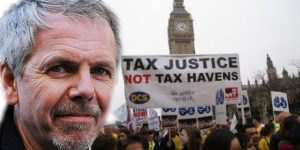 The Economist gets radical

Recently, we wrote an article welcoming a major intervention by The Economist magazine, which was arguing that rules allowing people and corporations to set interest payments against their tax bills is a historical anachronism whose time has now gone.

Though we welcomed the article, the global newspaper only pushed back timidly against common assertions that the corporate income tax should be abolished entirely. So we wrote a letter to them, which The Economist has published:

“Abolishing corporation tax would result in rich people shovelling their wealth and income into tax-free shell companies. This would make the tax system more, not less, complex. Ending it would also pump up idle corporate cash reserves at the expense of demand-creating government spending and investment. This would harm economic growth. If governments do not levy corporate taxes, they have less incentive to make companies transparent and accountable about their financial affairs, as we see in many zero-tax havens.

The corporate-income tax is one of the most valuable of all taxes, though constant pressure from lobbyists puts it at risk of disappearing entirely.

We agree fully! There are several further points to make here.

First, if you look at the letters page, notice the wide range of vested interests coming out of the woodwork in defence of interest deductibility. It’s a very one-sided political battle, this one – though that doesn’t change the justice of the cause.

Second, The Economist did a good job of boiling down the substantially longer letter we sent them. But instead of publishing that, please see our much more comprehensive document, Ten Reasons to Defend the Corporate Income Tax. It outlines all these arguments, and several more. In summary:

1.   Corporate income taxes raise essential revenue for schools, hospitals and the rule of law. Adding up to almost US$ 7.5 trillion since the global financial crisis erupted in 2008, in OECD countries alone.

2.   Less well understood is the fact that the corporate tax helps hold the whole tax system together: without it, people will stash their money in zero-tax corporate structures and defer or even escape tax entirely.

3.   The corporate income tax curbs inequality and protects democracy. The tax charge falls largely on the wealthy owners of capital: without it, corporations and their wealthy owners free-ride off the public services paid for by others.

5.   Corporate tax cuts, incentives and loopholes ricochet around the world. A tax cut in one place may suck capital out of others and prompt other jurisdictions to follow suit, in a race to the bottom where the only winners are the very wealthiest sections of society.

6.   The corporate income tax is particularly important for developing countries, which rely more heavily on it than rich countries do.

7.   Corporate taxes can rebalance economies. Corporations around the world are hoarding cash, not investing it. Corporate taxes harness this idle cash and put it to productive uses, via government spending on education, roads and other public services.

9.   Tax cuts and special incentives don’t stop at zero: they turn negative. In this race to below the bottom there is no limit on corporations’ zeal for free-riding off public goods and subsidies paid for provided by others.

The document also addresses seven common myths about the tax.