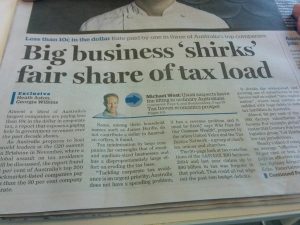 From Australia’s The Age and the Sydney Morning Herald, a front-page story:

“Almost a third of Australia’s largest companies are paying less than 10¢ in the dollar in corporate tax, according to a report that exposes a gaping hole in government revenues over the past decade.

As Australia prepares to host world leaders at the G20 summit in Brisbane in November, where a global assault on tax avoidance will be a key topic of discussion, the report found 84 per cent of Australia’s top 200 stockmarket-listed companies pay less than the 30 per cent company tax rate.”

The report itself (full pdf here, with introduction here) notes:

“United Voice collaborated with the Tax Justice Network to research what Australia’s 200 largest companies pay in tax. What we discovered was worse than we expected. A lot worse.
. . .
We examined the last decade worth of taxes by the Countries biggest companies. We found 29% have an effective tax rate of 10% or less. Worse, 14% have an effective tax rate of 0%! That means more than 1 in 10 of the top two hundred companies in Australia pay no tax at all.”

At 28 percent of all income tax receipts, Australia relies more on corporate tax revenues than other OECD countries, largely because of its huge minerals sector. Here’s the hit: That’s a familiar story, around the world. And, as we never tire of telling people, effective tax rates tend to just keep falling, and don’t stop when they reach zero. So-called “competition” between jurisdictions to offer tax breaks and subsidies just keep piling up.

There’s perhaps a little irony in the fact that Rupert Murdoch, the man behind the global operations of 21st Century Fox, is Australian.    We thought we’d dig up this section of a book review from the London Review of Books from 2004, just to highlight the arrogance of what has been going on.

That little grace note in the sums is accountant-speak for ‘Fuck you.’ Faced with this level of financial wizardry, all the ordinary taxpayer can do is cry ‘Bravo l’artiste!’”

That’s perhaps a polite way to put it.

Now read the report. It’s rich in detail and analysis, and will be a useful reference for some time to come.

These kinds of analyses – see this, from the United States, as another example – are becoming more common, as the world wakes up to the giant tax avoidance scandal.

Update: a tweet from the Dirty Digger himself.[/vc_column_text][vc_raw_js]JTNDYmxvY2txdW90ZSUyMGNsYXNzJTNEJTIydHdpdHRlci10d2VldCUyMiUyMGxhbmclM0QlMjJlbiUyMiUzRSUzQ3AlM0VOTyUyMHRheCUyMGF2b2lkYW5jZSUyMGJ5JTIwTmV3cyUyQyUyMEZveCUyMG9yJTIwYW55JTIwTXVyZG9jaHMlMjBpbiUyMEF1c3RyYWxpYS4lMjBDb3VydHMlMjBydWxlZCUyQyUyMHNvJTIwbW92ZSUyMG9uJTIxJTNDJTJGcCUzRSUyNm1kYXNoJTNCJTIwUnVwZXJ0JTIwTXVyZG9jaCUyMCUyOCU0MHJ1cGVydG11cmRvY2glMjklMjAlM0NhJTIwaHJlZiUzRCUyMmh0dHBzJTNBJTJGJTJGdHdpdHRlci5jb20lMkZydXBlcnRtdXJkb2NoJTJGc3RhdHVzJTJGNTE2MzEwOTc3MDk3NTA2ODE4JTIyJTNFU2VwdGVtYmVyJTIwMjglMkMlMjAyMDE0JTNDJTJGYSUzRSUzQyUyRmJsb2NrcXVvdGUlM0UlMEElM0NzY3JpcHQlMjBhc3luYyUyMHNyYyUzRCUyMiUyRiUyRnBsYXRmb3JtLnR3aXR0ZXIuY29tJTJGd2lkZ2V0cy5qcyUyMiUyMGNoYXJzZXQlM0QlMjJ1dGYtOCUyMiUzRSUzQyUyRnNjcmlwdCUzRQ==[/vc_raw_js][vc_column_text]Now this is the standard response. We’ve called it the “Philip Green” defence – “no tax was due, so no tax was avoided.” All of which whitewashes all the shenanigans that were engaged in so that no tax was due in the first place.

And, we should reiterate that very important point about tax avoidance, in our “risk mining” blog we pointed to earlier, building on David Quentin’s work. Murdoch is undoubtedly wrong to say that ‘courts have ruled’ on this. What, on all of his tax affairs, going back in time? There is no such thing as a blanket whitewash court ruling over a company’s tax affairs, like some sort of seal of approval. There are specific cases, but most cases never get litigated or challenged, so we never know for sure whether a company has crossed the line or not.

And what Australia’s taxpayers are concerned about here are not the technical legality or not of any given tax position: they are concerned with the giant economic transfer of resources away from them, towards wealthy capital owners such as Rupert Murdoch. Consider this, again, through the “risk mining” lens to understand what’s going on.

To say that something has not been shown to be illegal isn’t the same thing at all as being shown to be legal.[/vc_column_text][/vc_column][/vc_row]