Nick Shaxson ■ The John Oliver show: why it works 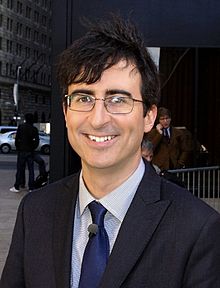 We’re not going out on a limb to write a blog about the world-famous U.S./British satirist John Oliver, former sidekick of the Daily Show‘s Jon Stewart. There’s a good tax justice angle, as you will see. An article in Radio Times begins:

“Fifty-two million. That’s the current figure for the total number of views on YouTube for Last Week Tonight with John Oliver – an HBO political comedy hosted by a Brit. Not bad for a show that airs at 11pm on Sunday nights on cable, and only started three months ago.”

His new winning formula has been to dare to take on serious subjects, get angry about them, analyse them in new ways, and produce the hilarious – yet devastating – analogy, to make a point.

And in this context, the tax justice angle.

“These gags don’t just sugar the pill: they’re always pressed into hard service, helping to ram Oliver’s point home. Take, for example, his explanation of why citizens and corporations can’t reasonably withhold tax dollars in protest at a single piece of government expenditure: it’s a salad bar. You can’t demand a discount because you have a moral objection to beets. “Of course you do! They’re an abomination of a root vegetable. Their bland flavour and slimy texture is an affront unto the Lord. And if you can persuade enough people of that, you can have a referendum to remove beets from the salad bar in the future. But until such time, you’re paying for those f***ing beets.”

Yes, democracy is messy, and our leaders never make all the choices we like. But pay your taxes. Otherwise someone else is going to have to pay them for you. And that’s not the way to a healthy society.

And for something similar but different, if you can see it in your region: Jon Stewart on tax-fueled corporate inversions.