Nick Shaxson ■ Howard Davies: the banks that ate the economy 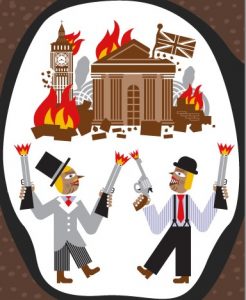 Update: another piece of research here.

From Project Syndicate, an article with an identical headline to ours by Howard Davies, former Chairman of the UK’s Financial Services Authority (FSA).

“ability to both invigorate and incapacitate large parts of the non-financial economy.”

Its an ability that we have described as a Finance Curse, analogous though not identical to the well-understood “Resource Curse” that afflicts mineral-rich countries, where billions or trillions of dollars wheeling into and through an economy from the dominant sector don’t seem to translate into better living standards for ordinary folk. The dominant sector, far from being a goose that lays the golden eggs that everyone imagines it to be, turns out to be a cuckoo in the nest.

It’s quite uncanny how close Davies’ analysis is to our way of viewing all this – all he’s missing, really, is to make the link with the Resource Curse. It’s one of those things where once you see it, it’s so obviously right.