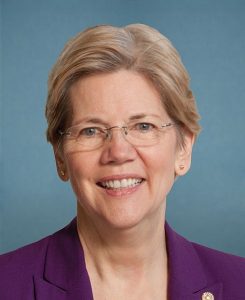 “Now look, you built a factory and it turned into something terrific, or a great idea. God bless — keep a big hunk of it. But part of the underlying social contract is, you take a hunk of that and pay forward for the next kid who comes along.

Couldn’t have said it better ourselves. There’s speculation that she might run for the U.S. Presidency.

Via Tax Research. One for our quotations page.