Race to the bottom ↘ Tax abuse and investigations ↘ 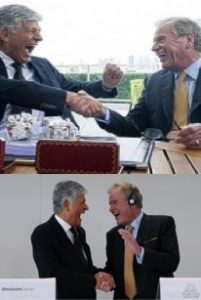 How artificial is the bosses’ joy – or the merger itself?

Reuters is carrying a fascinating story with a less than fascinating headline: “Push for tax-avoidance curbs in G-20 threatens Publicis-Omnicom deal.”

Last July Paris-based Publicis and New York-headquartered Omnicom announced plans to merge to create the world’s biggest advertising group, which would be registered in the Netherlands and tax resident in the United Kingdom.

“On Wednesday Omnicom Chief Executive John Wren said the Dutch and British tax authorities had, “unexpectedly” so far failed to approve the arrangements, which Omnicom said last year would save $80 million a year in taxes. Wren added that if the UK and the Netherlands did not approve the structure, the whole deal was at risk since “there is no Plan B.”

If the tax parts don’t work, then the deal may fail. So this looks like a classic example of a merger deal driven, or substantially driven, by tax abuse (a term we prefer to use instead of the more common ‘tax avoidance’).

Many mergers have happened substantially, if not almost entirely, for this reason.

And remember: the tax savings to the companies have nothing to do with true efficiency or productivity or producing better widgets or services: they are simply about engineering transfers of wealth to mostly wealthy shareholders away from mostly poorer taxpayers elsewhere. They are ‘tax efficient’ in the tax adviser’s euphemism, but from an economic perspective there is nothing efficient about any of it. There may be other ‘synergies’ and perhaps even genuine economic efficiencies from a merger, but the paragraph above suggests it the deal is based on this unproductive, abusive wealth transfer.

Such a merger would be a shining example of the corruption of capitalism. The activity at the heart of it, often known as tax avoidance, is better characterised as tax abuse, since this gets us away from the legal issues and towards the more important matters of economic substance.

And so far we’ve only got past the first three paragraphs. The fourth says something interesting, too. Two sources told Reuters:

“an anti-tax avoidance strategy being pushed by the Group of 20 most powerful economies was making it more difficult to get such approvals . . .lack of cooperation between the UK and Dutch authorities is endangering the deal.”

This would be the OECD-led BEPS project that they’re talking about. They are saying that it is already appearing to have teeth. Which is excellent news, as far as it goes. And there’s more good news:

“Lawyers who have previously worked with companies moving their domiciles said tax authorities were beginning to take a less flexible approach when asked to approve tax-reduction structures. They said that this was a response to public anger over such moves, and the resulting political impetus for the authorities to crack down, as well as the proliferation of tax maneuvers.”

We are delighted to have made a contribution here, in helping frame the debate in the UK, the Netherlands and elsewhere, along with various others such as UK Uncut.

The last point is a little more technical. Reuters:

Which is artificial and economically odd. In this case, Netherlands gives companies certain tax temptations, while the UK offers others. David Quentin, a UK tax barrister, told TJN:

“Tax professionals love to suggest that the fight against tax avoidance creates uncertainty for business.  The real story here, however, is about the economic futility of being a corporate tax haven.

UK governments of all stripes fetishise the idea of the UK being an HQ jurisdiction for multinationals, and they naively suppose that being tax resident here means the same thing.  The UK has therefore plunged headlong into what it described as a “more territorial” system of company taxation, which was a euphemism for becoming a corporate tax haven.  Now it finds itself being exploited as such by multinationals like Fiat Chrysler who propose to use the UK as a residence jurisdiction without even incorporating here, let alone actually creating jobs.  This story is an even more embarrassing result: a public row over corporate residence with another notorious onshore corporate tax haven in a classic case of bald men fighting over a comb.”

Here is one of those truly embarrassing recent results. The Italian carmaker Fiat said it would move its tax residence to the UK, following the UK’s recent changes to turn itself into more of a corporate tax havens.

The number of jobs created in the UK?

Tax wars, the more accurate term to describe what is often known as tax competition, are corrupting the fabric of global capitalism. The UK and Netherlands have been engaging with gusto, although the OECD’s co-operative project does seem to have been – at least for the moment – reining  in some of the worst excesses.

On a separate matter, it may interest some people to learn that the Netherlands has been competing with the likes of Delaware and the British Virgin Islands and the Cayman Islands in the race to the bottom on corporate governance. As Reuters notes:

“a Netherlands domicile can be more helpful as Dutch corporate rules permit anti-takeover provisions not allowed in the UK and offer more flexible rules on corporate governance matters, lawyers said.”

“More flexible” is, in this area, a euphemism for “lax.”