Nick Shaxson ■ The Offshore Wrapper: a week in tax justice #59

Our quirky weekly news round-up from the topsy-turvy world of tax havens.

The piratical Duchy of Luxembourg charges journalist over LuxLeaks

What does Jean-Claude Juncker think of this?

Luxembourg, the country he led for 18 years and steered in the direction of becoming one of Europe’s biggest and nastiest tax havens, has charged journalist Edouard Perrin with “violating business confidentiality”. Not content with throwing the book at whistleblower Antoine Deltour, and another unidentified French employee of the accountancy firm PWC, it is now vindictively pursuing after a journalist.

Perrin was the man who in 2012 revealed the existence of thousands of secret documents that Luxembourg had signed with corporations helping them to avoid taxes on their global earnings.

Exposing the fact that this small state is wilfully engaged in 21st century financial piracy is undoubtedly in the public interest — particularly at a time when governments throughout the world are making severe cuts in public services to deal with large fiscal deficits.  Yet despite this, Luxembourg feels it must seek criminal charges against a journalist who sought to inform the public about this trade. Criminals accusing the innocent: and not for the first time in the topsy-turvy world of offshore.

No action has been taken against Luxembourg, and the Prime Minister of the country who designed the parasitic system was made the president of the European Commission. Take a look at his record. 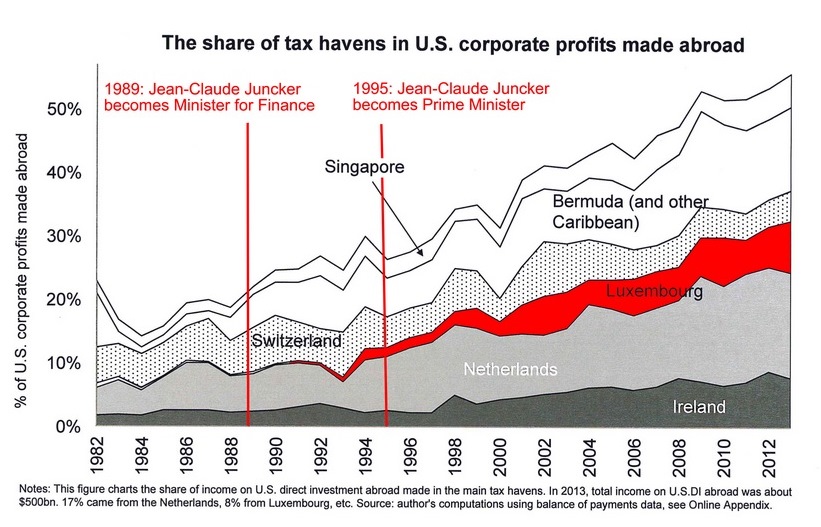 We’re going to say it straight: we strongly suspect that Juncker is continuing to provide discreet political cover for the Luxembourg tax haven which is subverting other European economies, even while he serves as President of the European Commission.

If he wanted to show that this leopard has changed his spots, then he or his office needs to make a clear statement expressing abhorrence at what Luxembourg courts are doing.

Freedom of the press organisations have described Luxembourg’s latest move as shocking — and rightly so. We at Wrapper Towers agree.We have called Luxembourg the “Death Star” of financial secrecy in Europe: behaviour like this is only going to reinforce our view.

The whole episode can only be described as a disgrace. The charges must be dropped immediately. That’s the former head of the IMF

Rato in dirty water – who’s next?

Last week we reported on the arrest of the former IMF chief and vice President of Spain, Rodrigo Rato for alleged money laundering and tax evasion.

Now the citizens’ action group behind the move to indict Rato – 15MpaRato has announced it will focus attention on ensuring other senior figures in Spain’s recent economic troubles are brought to justice.

In particular the group want to see criminal investigators question the former director of the Tax Office, Beatriz Viana.

The group claim that Viana, who had previously worked for Rato, stopped an investigation into which senior public officials and industry leaders had benefitted from Spain’s tax amnesty. The amnesty allowed people holding undeclared offshore accounts to bring the money home without fear of fines or imprisonment.

Rato has never revealed whether he used the amnesty. But the contradictions between Rato’s declarations in the year of the amnesty and subsequent years led to him being placed on the list of people suspected of money laundering. ?

Who will be the next to fall? 15MpaRato have started the twitter hashtag #ComplicesPaRato which may be worth following .

You’ll never find me in a million years

Last week saw the arrest of Navinder Singh Sarao, the man who is alleged to have been responsible for the 2010 flash crash.

Sarao is accused of using a computer platform to place $200m of false trades, causing the Dow Jones to crash for a few minutes before recovering. Mr Sarao is alleged to have made tens of millions of pounds from these market movements.

Sarao may be a geeky, tech genius working from his parents’ house in a suburb of London. But he is not quite a master of deception.

According to Global Witness, the Department of Justice complaint against Sarao says he used anonymous companies in the Caribbean tax haven of Nevis in order to hide the wealth he made manipulating the markets.  Nevis is a little-known ‘specialty’ tax haven, for connoisseurs of offshore murk.

But Mr Sarao appears to have missed the point of using anonymous offshore companies.

Our City genius decided to use a company title which included his own name and a description of what he was allegedly up to: “Nav Sarao Milking Markets Limited.” Brilliant.

Jersey to fund 0% corporate tax rate with charges for healthcare

Jersey government ministers have announced the tax haven will have a £125m deficit by 2019.

The government claims this is partly due to unbridled public spending. Which is a tricky argument to make, given that last year government departments significantly undershot their budgets.

Richard Murphy has a more credible explanation. The largest industry in Jersey is financial services. And guess what? The wise rulers of Jersey is choosing not to tax ’em.

Hmmm, the Wrapper wonder if this is the reason why the country spends more than it can earn?

So while the good people of Jersey will have to pay more for their healthcare, the companies from around the world registered in Jersey will continue to enjoy healthy profits due to the many tax breaks they enjoy.

That’s social justice – Jersey style. And this is just the tip of an iceberg.

Where is offshore, anyway?

A story from the Fiscal Times illustrates the thorny conceptual issues that the mind has to grapple with when dealing with offshore banking.

Of the $2 trillion held offshore by US companies, roughly half is in the United States.

The issue arises because many of the US companies hoarding their profits offshore bank with US banks. Those banks are based in the US, subject to US laws and regulations. From a regulatory point of view, the money is in the US financial system.

However, from a tax point of view the money is offshore, outside the US fiscal system. The article raise the point of whether the offshore problem is really as difficult to solve as many people think. After all, if the money really is in the US – why not just tax it?

How to get rich, offshore-style: steal dead people’s stuff!

An intriguing email came in this morning from Offshore Alert, the indefatigable investigators who run a yearly conference on the subject of tax havens (next one’s about to start, in Miami). The top three lines of their email read like this:

“An offshore provider in Europe has discovered a novel way of becoming fabulously wealthy: For decades, he has been pilfering the assets of his wealthy clients once they died, instead of passing them on to legal beneficiaries, so says his company’s former computer engineer.”

All this secrecy is very helpful for those trustees, tempted by all that loot they’re supposed to be handling at arm’s length!  If your descendents don’t know about it, they won’t claim it – and you can nick it!

Offshore is a treacherous place – even if you’re rich: just look at how tricky trusts and foundations can be.

And in light of scary evidence like this, who would trust ’em?

Offshore Alert describes this theft from dead bodies as novel. But it isn’t. Just ask those Swiss bankers who took advantage of offshore secrecy to try and pull the wool over the eyes of the families of Jewish people murdered by the Nazis in the Second World War.

Ugh.  And don’t ever let them forget it.