John Christensen ■ The Offshore Wrapper: a week in tax justice #54

By the rivers of BabyLon-don

The London property market is awash with offshore cash. Studies from estate agents show that 90% of newly built luxury property is bought by overseas buyers, often acting though an offshore vehicle.

Some 36,342 properties in London covering 2.25 sq miles are owned in BVI, Jersey, Isle of Man, Guernsey and other secretive boltholes.

Politicians like London mayor and prime minister hopeful, Boris Johnson, describe this sleazy money as a welcome ‘investment’ in the city. But are they right to do so? It found that since 2004 over £180m worth of property in UK has been under criminal investigation for being suspected proceeds of corruption.

Over 75% of these properties use offshore corporate secrecy. Half of the properties investigated were worth over £1m.

And it seems that this may be only the tip of the iceberg. Estate agents only account for 0.05% of suspicious activity reports to law enforcement agencies, despite working in an area which is clearly exposed to money emanating from corrupt sources.

Well it appears that they have no legal obligation to check where the money to buy a property comes from. If someone turns up with a few million in cash and wants a contract to be made with an anonymous British Virgin Islands company, then that’s just fine.

Are you an ultra High Net Worth individual worried about the pesky government trying to get hold of some of your hard earned cash to give away to worthless scabs who don’t know the meaning of a hard days work?

Are you anxious about some IT consultant stealing details of your secret bank account in Switzerland and giving them to the media?

Are you concerned about the reputational risks of using the same offshore tax structures used by drugs dealers and organised crime?

Do you need an offshore place to avoid taxes you can trust?

If you answer, “Yes” to all of the above, then there is a place for you. Welcome, my friend, to Puerto Rico.

Since 1896, this small Caribbean island has been one of the few colonies of the United States. But crucially, Puerto Rico is not a state.

The island’s unique status has created a rather useful loophole. Normally US citizens are taxed on their global income, wherever they reside. (It’s why secret bank accounts are a popular form of tax evasion.)

But in Puerto Rico, the US tax code on foreign earnings doesn’t apply since it is not foreign. At the same time, the island is exempt from federal taxes and allowed to set taxes as they please.

As described by a money manger quoted in Forbes: “The way the U.S. tax code is written, I could be on Mars and be taxed on intergalactic income but not if I’m sitting on this island in the Caribbean. It’s kind of in a twilight zone”.

Since the US government started cracking down on Americans using the more traditional tax havens to hide their wealth, Puerto Rico saw an opportunity.

According to the 20/22 Society, an organisation which has been formed to promote Puerto Rico’s tax haven status, changes to the law enacted in 2012 mean that “organizations and individuals are allowed new and exciting benefits. These new benefits apply to individuals and organizations who relocate to Puerto Rico and may include significant reductions of income taxes on long-term capital gains, dividends, interest, earnings and profit, and property. These benefits are possible because income generated within Puerto Rico is generally not subject to U.S. federal taxation.”

The 20/22 Society also has a publicity campaign called “The Puerto Rico Advantage: Sun, Sea and 4% Taxes” referring to the country’s income tax rate.

Truly, Puerto Rico is the land of the free ride.

A Zambian Methodist minister has called on British Christians to join in the crusade against tax avoidance perpetrated by mining companies in Zambia.

The Zambian authorities estimate that $1bn a year is lost to tax avoidance and the Church of England invests in many of the companies operating in the country.

Dr Suzanne Matale said that they must use their position of influence to effect change.

Trouble is, not even God can gain access to BVI corporate data. 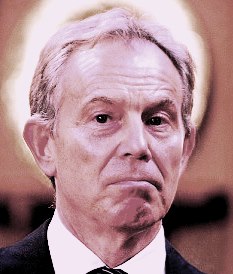 Next week Blair inc. will be published detailing the post-prime ministerial financial activities of Tony Blair.

The former UK prime minister has amassed a property portfolio worth millions and is rumoured to be worth at least £60m.

Financial secrecy plays its role as the complex corporate structure which Mr Blair has set up. So it is extremely difficult to know where this vast wealth comes from and what he is being paid for.

Blair inc cheekily suggests all that cash isn’t for his insight. The book takes a look at some of the speaking engagements Blair has had since leaving office:

“In a 2007 speech at a VIP banquet in the city of Dongguan in China, he declared for his $200,000 fee that: ‘’The reason I am here is because I was told everything happening here was amazing. Dongguan’s future is immeasurable.’”

Such twaddle infuriated Chinese newspapers, which said Blair’s vacuous remarks showed he was interested only in “digging for gold” and “money-sucking”.

You can read a preview of the book here. It is published on 19th March. 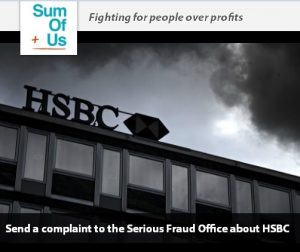 Remember how loads of governments have known for years that HSBC was holding all sorts of dodgy money in secret accounts in Switzerland but nothing was done about it?

Now you can take action yourself, and call on the UK’s Serious Fraud Office to open an investigation. Campaigning group, Some of Us has launched a petition which you can sign up to here.