“We do not want to become another Cyprus”

The former Yugoslav republic of Macedonia is about to become the latest combatant in the tax wars. Prime minister Nikola Gruevski has put forward proposals to attract multinationals by setting up an international financial zone (or tax haven if you will) in the country.

But some fear this will lead to large amounts of criminal cash flooding into the country. Something which must be of particular concern to a region that is no stranger to organised crime.

Commenting on the plan, Pavle Trajanov, a member of parliament and former police minister, warned: “Crime money pours into these kinds of zones…. Some of that capital originates from acts of terrorism. We do not wish to become another Cyprus, where [Serbia’s former ruler] Slobodan Milosevic kept his money”.

Macedonia’s PM and investment fund managers, who no doubt stand to benefit hugely from this move, have justified the proposals on the basis that the tax haven will create jobs.

But consider this: The Cayman Islands has a total population of 60,000 and is one of the largest financial centres in the world. According to the latest figures from the Cayman Islands’ Economics and Statistics Office, a total of 3,229 work in the financial services sector, of which 25% are foreign.

Take into account financial services also includes domestic banks which cater to the local economy (and is more labour intensive).

Macedonia has a population of 2.1 million. The number of unemployed people in Macedonia is 275,225.  This is 116 times the number of people Cayman nationals employed in its financial industry.

We can safely say Macedonia’s unemployment problem will not be solved by it becoming a tax haven. 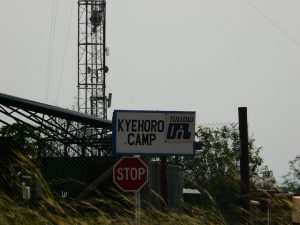 Tullow Oil has been slapped with a huge $407m bill from the Ugandan tax authority.

The charge originates from the company’s $2.9bn sale in 2012 of oil field assets to French energy giant, Total.

Tullow argues a contract with the Ugandan finance minister means it is not liable to capital gains tax on the sale.

The company is extremely concerned that the Ugandan Revenue Commission retrospectively overturned a decision of a government minister.

In other news from Uganda, the country’s Anti-Corruption Commission is starting to show some real bite if some of its recent rulings are anything to go by.

One of the issues when it comes to fighting corruption is that jail time alone is often not a deterrent. If you can steal enough money to last you a lifetime, your children’s lifetime, and your grandchildren’s lifetime, isn’t a bit of time behind bars a price worth paying?

In the case of John Muhanguzi Kashaka, the former permanent secretary of the department for local government, the answer will most definitely be “no”.

Kashaka, along with his fellow co-defendants, has been told to pay back the proceeds of a KES 4.6bn (€39m) bicycle purchase arrangement by Ugandan taxpayers which as it seemingly turned out involved no bicycles.

The Ugandan Observer branded the asset recovery demand a “useful message to other would be offenders”.

A senior Australian Treasury official, squared up to tax avoiding multinationals at a conference in Melbourne last week.

“Our high level of willing participation in Australia is the result of many factors – such as belief in taxes, trust in the fairness of our system and the integrity of the administration,” said Rob Heferen, executive director of the Treasury’s revenue group.

“Ultimately, (these practices) could lead to a bigger risk that other taxpayers stop complying and thereby erode Australia’s tax base.”

Or in other words, multinationals by using all sorts of complicated, yet apparently legal, offshore structures to avoid taxes are setting a bad example for everyone. Quite.

The Silk Road to run through Jersey?

Bitcoin is the virtual crypto currency, which has taken the world of online illicit transactions by storm since it was launched five years ago.

For those unfamiliar with bitcoin, see this excellent primer “How to Explain Bitcoin to your Grandma” But in very basic terms, bitcoin is an electronic version of cash. And just as you don’t know who has been using the $100 bill in your hand, there is also no way of tracing the ownership of a bitcoin.

The difference is that cash can be awkward if you want to move large amounts of it. Bitcoin is online and easily transferable. And transfers are completely anonymous. This has a number of advantages.

Now, imagine the potential for an anonymous, online currency for the world’s secrecy jurisdictions and tax havens. No more flying to Zurich to use Credit Suisse’s “special branch”. No more taping cash to the bodies of cash mules.

So as a consequence, tax havens have become increasingly flirtatious with bitcoins. Alderney in the Chanel Islands last year considered starting a bitcoin backed currency until the Guernsey establishment intervened. It thought dealing in bitcoin might damage the image of the Guernsey financial services industry.

The Isle of Man has started a digital currency incubator which offers discounted services to bitcoin startups.

Now Jersey has be come the home of the first “regulated” bitcoin investment fund after the Jersey Financial Services Commission gave its approval to “Global Advisors Bitcoin Investment Fund” (GABIF).

Regulated seems to be a bit of an exaggeration. There are currently no anti-money laundering controls on bitcoins or institutions dealing in bitcoins in Jersey. Although the government accepts that these need to be put in place it says that first, it needs to do a lot of thinking.

According to tax-news.com, the Jersey Financial Services Commission expects to introduce proposals (not rules but proposals) by the end of 2014.

So there we have it, a “regulated” fund which deals in an anonymous crypto currency and subject to no money laundering controls for at least the first few months of its operation. Silk Road merchants, register your interest here

A report out from the Health Poverty Action coalition documents how Africa is actually a net contributor to the west’s wealth, and not a drain through aid payments. Unfortunately much of that contribution comes from illegal logging, tax avoidance and other nefarious activities.

It says a picture is as good as a thousand words, so I leave you with their video.