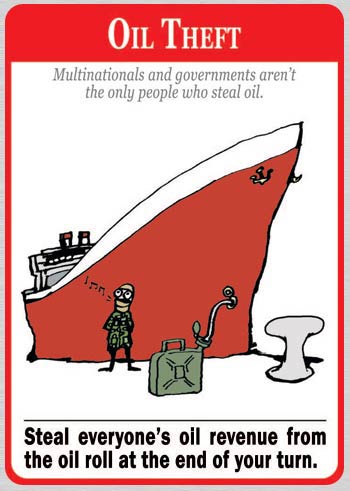 From the brilliant War on Terror board game

Nigeria: the land of lost opportunity. Billions of dollars from oil revenue has literally been siphoned out of the country. The story – and corruption – has run for decades.

Earlier this year, there was a startling new twist to the never ending story. The head of the Nigerian Central Bank Lamido Sanusi was fired by the President Goodluck Jonathan after revealing that between $10-20 billion in oil revenues had gone missing.

So how does one steal 250,000 barrels of oil a day? Investigative Journalist Emmanuel Mayah, a participant of TJN’s Illicit Finance Journalism Programme, has written a series of articles exposing how this illicit trade passes through a place nicknamed the Togo triangle, a floating illicit oil market off the coast of Togo.

Togo has no oil deposits whatsoever. Nevertheless, millions of barrels passes though the Togo Triangle and onto countries around the world including North Korea.

Emmanuel’s story paints a vivid picture of a wild frontier in the world of illicit oil. Populated by middlemen, traders, prostitutes and pirates it is a dangerous place to visit day or night.

The full story can be found here, and here.

Global anti-corruption campaigners, Global Witness this week published a report showing how the UK justice system failed to stop $110m from a corrupt Nigerian oil deal from passing through the UK.

Perhaps, the most surprising part of the case is that the money was held in England pending the resolution of a High Court dispute between two people involved in the deal. It seems that one middleman didn’t think he had received a big enough cut from the deal.

Before the case had concluded, the Nigerian parliament released a report stating the deal was contrary to the laws of Nigeria and should be cancelled.

Despite this clear red flag, the UK government failed to stop the money being transferred onto the middle man after the conclusion of the High Court Case.

Fortune favours the use of tax havens The companies that did use tax havens had over 7,000 subsidiaries offshore.  CTJ estimates that this results in a loss to the US treasury of $90bn a year. The full report can be found here.

Still the Americans are doing better than the Brits. A similar study in the UK conducted by Action Aid showed that the 98% of FTSE 100 were using tax havens where they had more than 8,000 subsidiaries. The FTSE 100 only looks at the top 100 companies on the UK stock exchange.

Imagine the situation. You are the leader of a small oil rich state and have just concluded a really sweet deal selling off your nation’s natural resources. You have also managed to pocket a huge bribe in the process. The bribe is so large you simply cannot stuff it under the mattress.

The usual channels, opening up a Swiss bank account for example, are becoming increasingly more difficult as the annoying “regulators” start to put all sorts of rules in place about banks taking deposits from “politically exposed persons”.

Thankfully innovators in the financial sector have the answer: Grandma!

According to Swissinfo.ch grandparents are not covered by the AML protocols. Grandparents also have the added advantage that they will not live that long, allowing assets to be passed on through conventional inheritance channels.

This nugget came from a longer article on how the Swiss property market is being used to launder money. It is a fascinating read and available here.

Listen to Swiss government officials and Switzerland is a model of good practice in countering illicit financial flows.

A Swiss foreign ministry official said last week, “There is an arsenal to minimise the risk of money derived from corruption. I think that the system works pretty well. We take care of cases that fall between the cracks.”

The same official told reporters that the Swiss government is currently working with Egyptian government to recover an eye-watering $781m which had been stashed in the country by former president of Egypt Hosani Mubarak and his cronies.

The Swiss official may have therefore better described the “cracks” in the country’s anti money laundering rules as “canyons”. The Maltese government is bravely and single handedly stepping in to stop the European Union from cracking down on corporate tax avoidance so saving companies from paying billions in taxes.

The EU wants to stop companies from exploiting hybrid loans to engage in cross border tax avoidance. Hybrid loans are a means by which companies can take money out of a subsidiary in another country and avoid taxes.

So later this month the EU intends to introduce a rule to compel member states to tax the profits of hybrid loans if those profits are tax deductible in the country they are coming from. The idea will be to remove the incentive to use hybrid loans for tax avoidance.

The new rule requires all member states to agree to the reform at the European Finance ministers meeting on June 20.

However Malta has said it will block the deal. It is currently the only country opposing the measure. This is apparently on a point of principle on the wording of the proposed new rules.

Of course we are absolutely sure that this has nothing to do with the fact that a suite of tax exemptions in Malta means it has the lowest effective corporation tax in the EU. Measures which have  “cemented Malta’s leading position as an onshore jurisdiction for reputable multinational groups” according to leading and reputable multinational tax planners KPMG.

To get the wrapper every week in your inbox sign up here: https://www.taxjustice.net/offshore-wrapper-signup/